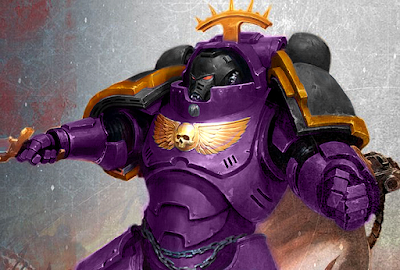 I'm just going to warn you this is a long one—sit back an enjoy!

Bull and I had our second game of 8th Edition 40k last night. We decided on a 'quick' 1000pt game as we continue to get our heads around the new rules. 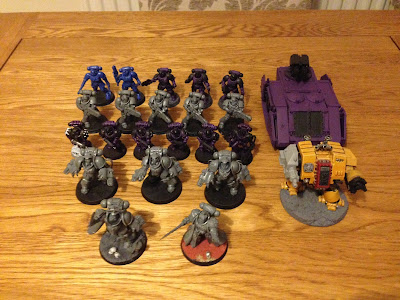 After assessing the models available to me, I decided to go for a Primaris heavy line up. An evolution of my list from our first game, containing only 23 models, this had a very elite feel to it. In contrast, Bull went for an infantry heavy Ork force, with 100 models hitting the board. That's odd of more than 4:1 in favour of the green skins. This was going to be brutal. 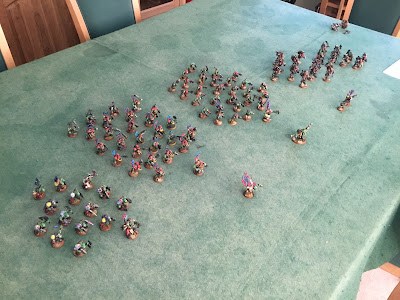 To help mitigate the situation I had the Burning Blade relic and the Salamander's Chapter trait, plus I upgraded my Captain to a Chapter Master and gave him Iron Resolve. I would need all the help I could get. 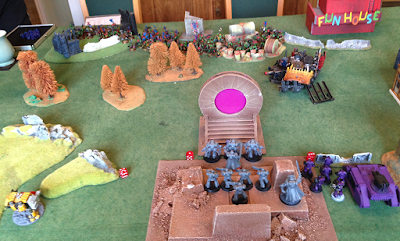 We rolled for mission and deployment, ending up with a "No Mercy" last man standing scenario deploying in an arrow shape only 9" away from each other. The one advantage of having few models is that you finish deploying first, so I got to choose who went first. I chose the Orks to go first! 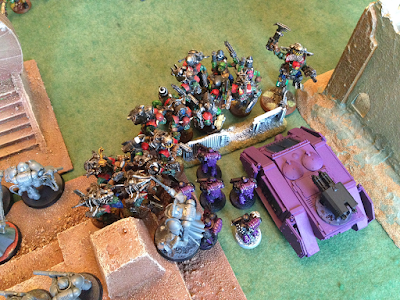 As expected, Bull dropped his Stormboyz right up in my grill, and they charged into my Sternguard. A mistake on his charge meant that his character, Boss Zagstruk, could only charge the Razorback and had to survive Twin Assault Cannon overwatch. He did, but only by a single wound! The Sternguard were decimated, twice over, and even a Heroic Intervention by my captain did little to slow the onslaught. 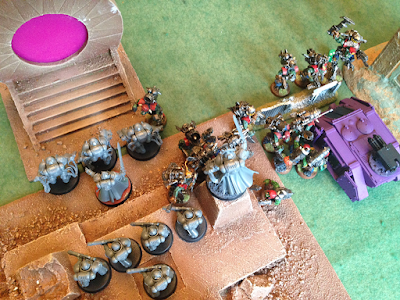 The positioning of my units meant that Bull was able to consolidate his Stormboyz in such a way that he locked my Aggressors and Hellblasters (my two remaining shooty units) in melee. I was devastated as this meant his big unit of 30 Boyz would be on me in the next turn unhindered. It seemed pretty much game over at that stage, I just could not see how my marines could survive the numbers being thrown at me. 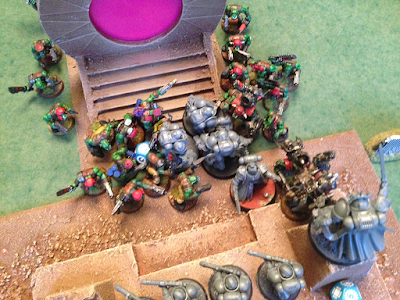 I dropped my Reivers behind enemy lines and they went after the Pain Doc. He eventually ran off the table on his final wound after failing a morale check. 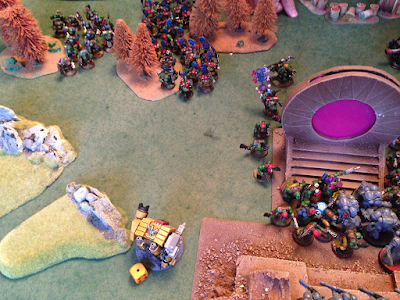 The combat rumbled on and I managed to thin out the Stormboyz, and even Boss Zagstruk died to a cheeky Razorback attack. The re-rolling of hits, thanks to the Chapter Master, was becoming really helpful—plus I kept forgetting the Chapter Trait re-rolls! Eventually though the unit of 30 poured in, though strangely had to daisy-chain around the back of the warpgate to stay in coherency. The main issue though was the Wierdboy's spell that gave everyone an extra attack, and the banner giving them +1 to hit. The Aggressors were epic, dishing out damage with their fists and somehow keeping to wounds taken to a minimum. The volume of attacks were starting to tell. 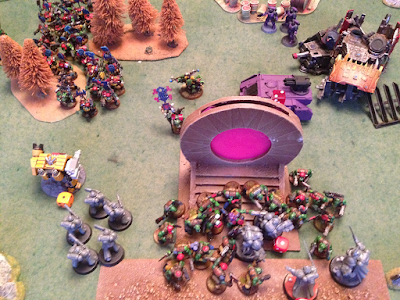 I had to do something to slow the advance of the third big unit of Boyz, and if I could take out the Wierdboy and Banner Boy then all the better. The Reivers jogged up and shot at the Wierdboy, taking off a wound. The Dread and Hellblasters stepped and poured fire into the big unit of Boyz, killing quite a few. The Razorback swung around the warpgate and also fired into the big unit, killing 5 more. The Hellblasters than charged back into the main combat by the warpgate, the Dred smashed into the big unit, whilst the Reivers and Razorback attempted to pin down the two characters.

A few hits later the Wierdboy, on his last wound, failed a morale check and ran off the table. The Dred killed more Boyz but was wounded just enough to be removed from play. The Orks in the main melee were dying but they were taking Primaris marines with them. The Aggressors finally died and the Hellblasters were reduced to two in number. Things felt like they were swinging back in favour of the Orks. 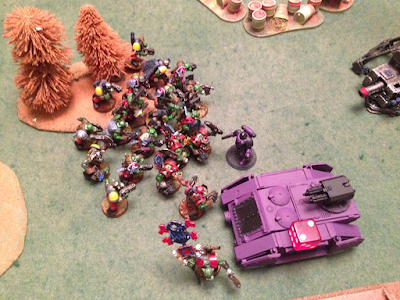 The last of the Ork units ran up and managed to get into combat with the Reivers, and the combined hits from this unit and the remaining Boyz from unit 3 took the Primaris down and turned their attention to the Razorback. The vehicle had been unable to make an impact of the Banner Boy, and his bonus to Ork attacks had been key throughout. My inability to identify him as a target was costing me badly. Eventually the combined attacks from both Ork units took down the vehicle, but as a final sting in the tail it exploded, killing a handful of Boyz from each unit and badly hurting the Banner Boy. 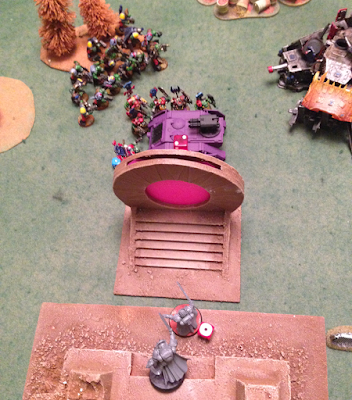 On the other side of the warpgate, the Hellblasters were gone but the Chapter Master and Librarian had cleared out the rest of the Boyz. We were approaching the end of the game and things were still in the balance—two mighty characters versus around 13 Boyz (including 2 Power Klawz) and the Banner Boy. 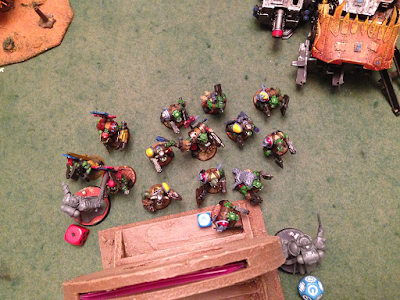 The Librarian swung round the left and hit the Banner Boy with Smite, killing him. He then charged into the 3 Boyz remaining from Ork unit three killing 2. The Chapter Master lumbered round the other side of the warpgate, charging into the larger Ork unit four. He survived overwatch unscathed and smashed the unit, killing 6. 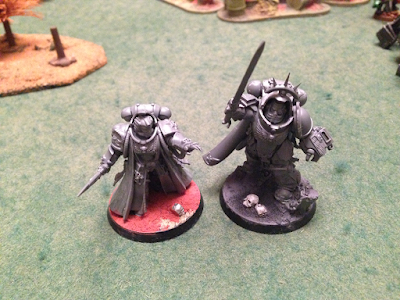 The remaining Ork Boyz all failed their morale checks badly and ran off the table—Victory to the Space Marines.

I'm still battered and bruised the morning after. Lots to contemplate and discuss, but I'll save that for another time…