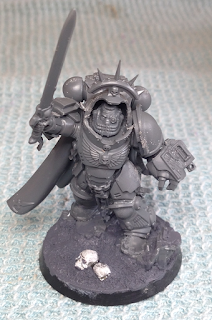 Today is codex day, so I was off out early to get my copy. Despite arriving 20 minutes after they opened, the new Primaris Dreadnought was already sold out of the local GW store. I've had the entire morning to do "hobby stuff", which is quite a luxury these days, so I decided to do more work on my Primaris Captain. 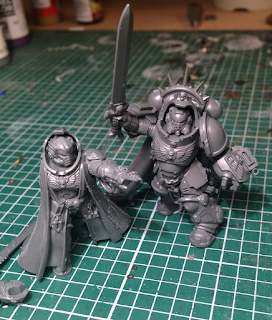 You may recall seeing him in a photo last week with my Librarian (above), and not long after this photo was taken I stuck him to his base. However, it's been playing on my mind that it was all a bit underwhelming for the Warlord of my new army, so resolved to fix things. 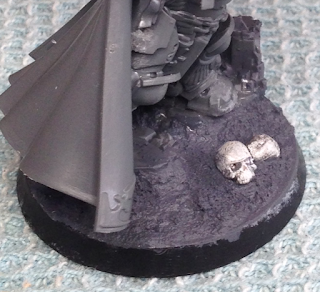 I found some terrain bits on an Assault marine sprue and stuck these to a 40mm base. I then filled all the gaps with GW Astrogranite Debris – a textured paint a lot like the Red Oxide that I have but much thicker. Once dry, I added the obligatory skulls and filled the gaps some more. Happy with the result, I hacked the Captain of his basic base and positioned him onto his new one. 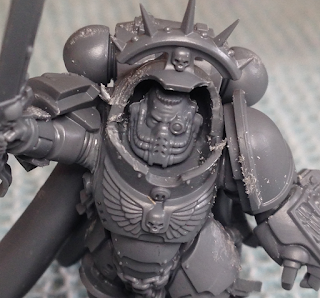 Unlike the Librarian, who I think looks better with the helmet rather than bare head, I wasn't happy with the Captain's head. I couldn't find anything that excited me until I glimpsed the new Aggressors. That kit has several Bane-like heads which would be perfect—a purchase was inevitable let's be honest.

The end result is fantastic and I seriously cannot wait to get this guy painted—I just need to sculpt a chapter icon on his shoulder pad!