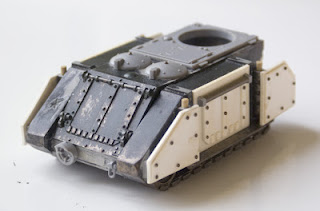 A long time ago, when I first decided to reinvent my Dark Templar marines as Mk6 clad astartes, I decided I needed to make my vehicles a little more bespoke. I had already bodged my version of 'extra armour' by removing some of the hatches and replacing them with reinforced strips plasticard. This worked fine in the early tournament days but I wanted to take things to the next level to something more elaborate. 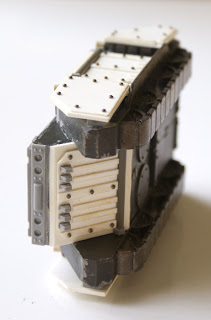 I cracked out the plasticard again and, using a razorback as a test piece, started my epic project. After sorting the extra armour and new hatches I also incorporated the top plate from one of the new Razorback models. This would give me access to a wider range of weaponry that didn't fit the metal Whirlwind top plates I had been using.

After completing the first vehicle, however, my enthusiasm waned and the project stalled, the models falling into the category of 'projects that were too big to be realistic for me to complete'. Over the next couple of years I dipped back in and things moved a little further forward, but the project was never going to see completion any time soon (an oh too familiar hobby occurrence in this household unfortunately). 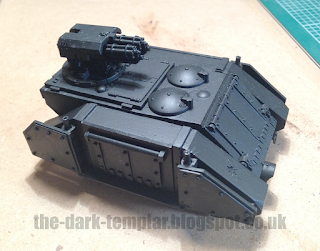 After many years of sitting idle, my 40k miniatures are seeing the light of day again thanks to 8th Edition. No games being played as yet, but I am finding a desire to go through the old storage boxes and see what's there. With my decision to look once more at my Dark Templar space marine project, it was inevitable that these vehicles were dusted off for inspection. 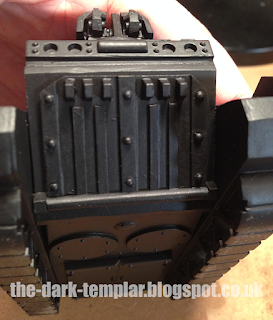 For the first time, these Razorbacks and Rhinos are starting to see some paint, the first three undercoated earlier this week after a few minor repairs and tweaks. If I can take things to the point that at least one of them has a completed paint job, before going back into storage, I will be very happy that things have progressed. If they actually get to see some game time, well, I'll just be over the moon!