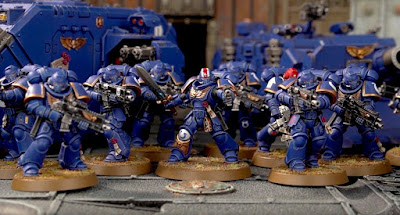 When I bought the Dark Imperium box set last month I sold off the Primaris marines virtually same day. I had no interest in them as I was going to build up my Plague Marine army that was started 5+ years ago and have proved very enjoyable to play.

Unfortunately, when I discovered the discrepancy in size between old and new Death Guard models, and the fact I couldn't take my Heldrake or Forgefiend (that I had spent days converting for Nurgle's delight), I was quite de-motivated. I switched my attention to my Dark Templar marines with the intention of simply repainting my old models so avoid any new purchases. Fool that I am, this was never going to be likely as GW released more and more rather spiffy new Primaris marine kits.

I rather liked the look of the Reivers so picked up the easy-build pack when it was released to see what it was all about. Alas the bigger dimensions and sleeker armour design of the Primaris marines started playing on my mind and it wasn't long before I'd gone back onto Ebay and bought the Dark Imperium Primaris marines, just like the ones I'd sold a month earlier (albeit with a profitable outcome)!

I had already started to paint the Reivers and this spurred on my enthusiasm for a new Primaris space marine army—and so the build began. 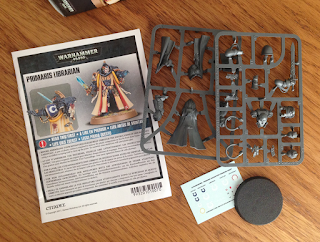 But I'm jumping ahead…

In a style that typifies my lack of discipline under certain circumstances, I purchased the (rather expensive) Primaris Librarian kit before I had received the Primaris marines from Ebay. This is so me, when the bit is between my teeth and I'm losing all sense of control or being frugal about a project. Ah well, no point dwelling on it—after 40 years you learn to recognise what's going on and roll with it, lol.

I have managed to hold my nerve when it comes to the plethora of new Primaris models that are to be released this weekend. I could easily have dropped another £100 on this project, but for some reason that seems a bridge too far. Maybe it's the idea that my painting queue is already congested and that adding another boat load of models would swamp me to the point of no return (not that this has stopped me in the past—maybe I'm finally growing up, lol). 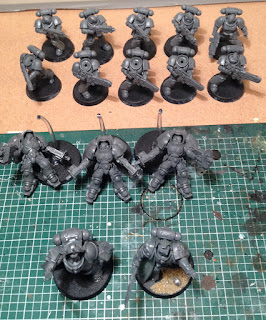 Each evening this past week I have spent some time in the garage, at my new work bench, building Primaris marines. It has been a lot of fun, though I have noticed that there are more repeat poses within the Dark Imperium box set than I realised. It feels god though, just like in the old days before a tournament. I'm getting a real nostalgic vibe with this project, despite the models all being brand new releases. It was good to get another game of 40k in with Bull the other week. Next one is book in for next week and I'm looking forward to it. 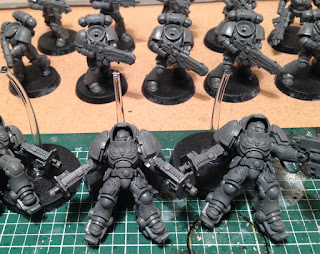 I was outnumbered last time when I faced Bull's Orks, but with a Primaris marine army I will have even fewer models on the table. I've always liked extreme armies, but this feels a little uncomfortable. I will have a new codex to use though!

All that's left to do is clean these models up, drill the gun barrels, and we can get some spraying done.