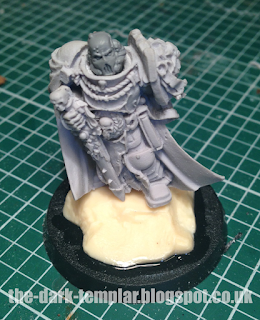 Typically I get distracted by the cooler aspects of building an army. My new look Dark Templar marine army is no exception. I discovered bitz from a project that never got started – a converted Space Marine Captain – and so couldn't resist the opportunity to get stuck in. The model is predominantly the Ultramarines Captain Sicarius miniature, so this should be a quick project. However, he is adorned with Ultramarine motifs and in need of making a little more unique.

The Sicarius model was purchased a couple of years ago, and is made from that hideous resin stuff that GW pumps out their non-plastic models in. I have never seen so much 'flash' in a long time and worse still, it was sitting amongst the finest details. If you've ever had Edinburgh rock (the crumbly confection from Scotland, not some form of heavy music) the texture and robustness is just like that!!

The flash was removed with a scalpel and I dug out the Dremel to sand off the Ultramarine logos. Not a big time sink (though I've spotted more looking at these photos). 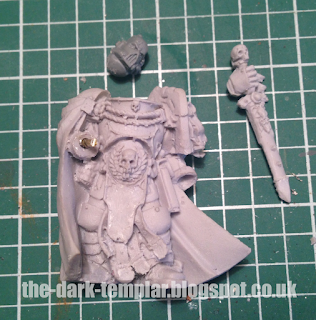 I decided to keep the same Power Sword, just trimmed off the Ultramarine logos from the top and bottom and pinned it in place. For the head I decided to pinch an idea from an old article on the From The Warp blog – this involved using a head from the plastic Captain kit. I knew I had one somewhere, but had no idea where to start looking. By sheer blind luck I managed to find a plastic container full of old space marine sprues, and amongst them was the one that I was looking for. OMG – that was awesome (especially as I found a bunch of other useful stuff in the same box!).

I'm still on the lookout for a suitable plasma gun, or maybe something even better – no decision been made yet so will come back to that. 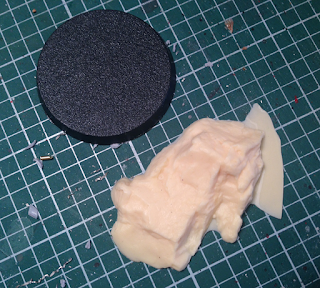 For the base I wanted something elaborate. The model was made to fit snugly on a 25mm base, but given that most characters nowadays are on much bigger bases I went for a 40mm. I managed to find more of the resin rocks I'd used on my Typhus conversion way back, so decided to repeat the process. 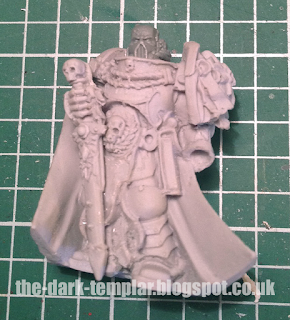 So, not bad for an hour (minus searching time). I just need to find a suitable ranged weapon and I can get to some painting!