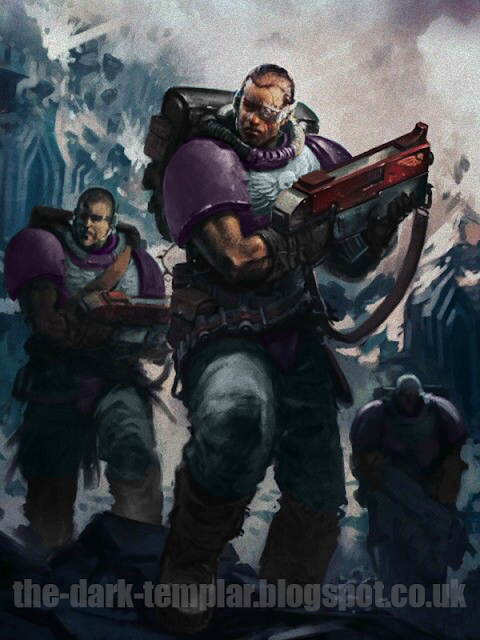 The Dark Templar were a broken chapter.

Constant war against a torrent of foes had brought them to the edge of extinction. Their homeworld destroyed, the survivors had been hiding out in deep space for centuries, gathering resources and rebuilding what they could.

Their fall from grace had been swift and out of nowhere. The reality was it had only been the 1st Company that had turned, but to the rest of the Imperium the entire chapter was tainted. They had been hunted down by the entire universe it seemed – other loyal chapters were dispatched to exterminate them and, once on the run, other races could smell blood and went in for the easy kill.

But they had not succumbed to the weight of hatred, they had endured a terrible trial and survived… just about. They lacked a lot of the resources that any other chapter would have. They also lacked numbers. Many of the chapter's veteran marines had been killed – a terrible loss indeed – but they were rebuilding and recruiting. Focus has shifted to sourcing and training initiates and the ranks were slowly being fleshed out again. It was now time to find a more permanent base of operations.

Scouts were sent out to recon a select number of planets. To see who else was about and the viability of a long-term stay. One such planet was #0204/211214… or Draa'san as the Dark Templar knew it in their native tongue. A small contingent, led by Sergeant Taal, made planetfall in the southern hemisphere and began their search.

Who, or what would they find…?


Illustration sourced from WH40k wiki and re-coloured by yours truly.


P.S. I've posted this at 7:45pm on Friday evening but Blogger is so useless you guys probably won't see it for another 5 hours if past experience is any indication!