40k: All About Eldar 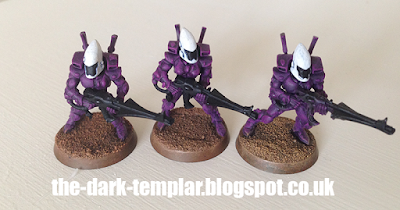 Almost 20 years ago, when I first started by Dark Templar space marines, Games Workshop revamped the Eldar model range. Naturally, being a twentysomething with lots of cash and few responsibilities I decided to start an Eldar army as well – my Drassan Craftworld Eldar. They had a background, a funky purple colour scheme and I spent a long time painting up 20 Guardians. Many of the other models I purchased never got to see paint and in the end I donated many of them to our resident Eldar player. I kept hold of a few key models though and vowed one day to complete my Eldar army. A familiar story on this blog I think you'll agree and one that is often accompanied by a rolling of the eyes and a wry smile.

Fast forward to present day. I've just dusted off the paints and invested some time and money in resurrecting my Dark Templar marines – so what happens next? That's right! I rediscovered my Eldar models in their (rather dusty) case and thought "They'd be great for our 40k in 40 minutes revival games".

Having decided during the intervening years that my Dark Templar would be represented by a purple colour scheme, the Eldar were looking like sad copycats (despite being the originators of this rather funky colour palette) and in need of a refresh. After lots of contemplation I thought I would test my Blood Angel red recipe and go for a Saim-Hann look.


All went well and the excitement grew (as it invariably does). I recalled that Bull had acquired the aforementioned Eldar army from our former gaming pal and had resided in his garage for many years - including two house moves – since it last saw the gaming table. Never one to lower himself to using the pointy ears, I asked Bull if he needed to clear some garage space, explaining my readiness to aid his Eldar infestation. He was very receptive and proceeded to catalogue the collection, as indeed it turned out to be an entire collection of Eldar models - many, many more than I had remembered.


Last Friday I dropped by on my way home from work and collected the entire lot, much to my wife's disappointment. I spent the evening going through everything. So many memories of past battles held in one cardboard box - the number of models I considered nemesis at one time or another was quite unbelievable. There was something strangely satisfying having them laid out on the table in front of me, knowing their future was in my hands - hahahahaaaa!

I picked out the key models that I wanted to include in my own collection and spent some time fixing, rebuilding and undercoating, ready for their new red colour scheme.

No promises here as, already, available hobby time has evaporated in favour of essential chores and family time, but the enthusiasm is still there so I'm hoping to get a few more models painted before they hit the hobby cupboard again. I also have quite a few models to put up on Ebay, some of them quite old and no longer available. However, I'm determined that the Eldar will see the light of day again and face the Orks once more in battle.