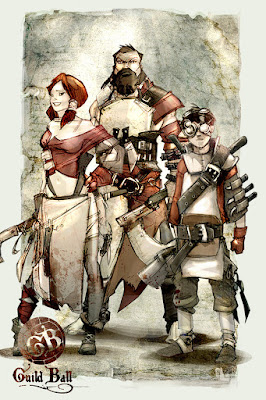 The ever-efficient Element Games delivered my new Butcher's models on Friday – just 24 hours after ordering – and so the tone was set for the weekend. I had to somehow find time to build my starter team. I managed to grab an hour or so on Saturday afternoon (our wedding anniversary no less) to break out the superglue and get some construction done.

I'll be honest, I was not looking forward to building these models. My experiences with the Mortician starter team bought at Salute were lingering in the back of my mind and I was hoping things would be smoother this time. 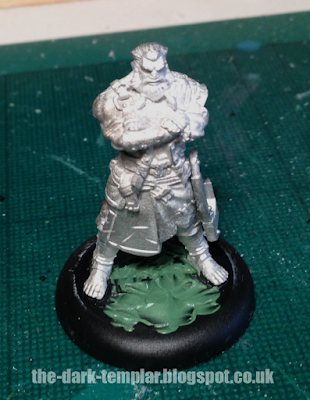 Ox was the first up for the simple reason he was pretty much a one-piece model. He needed an axe attaching to his side and I was contemplating how to pin such an exposed addition when I noticed a perfect axe-shaped groove cut into the main model. A blob of superglue later and Ox was on the sidelines drying off. 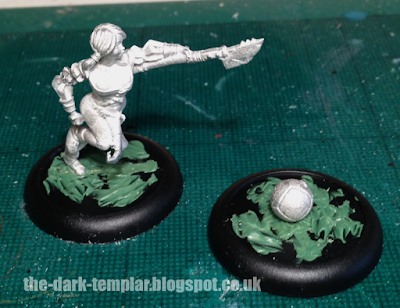 Next in line was Brisket – another straightforward model in theory as she only needed an arm attached. This would definitely need pinning but I discovered that there was precious little volume in the arm in which to drill a hole. I did just about enough to get it in place and repositioned the arm so that I could tack the hand to her thigh, for added support. Job done!

The ball was not an issue, I just has to fill the bulk of the slot with greenstuff to hold it in place. I wanted the ball to rest on the surface, not look like it was stuck in thick mud. 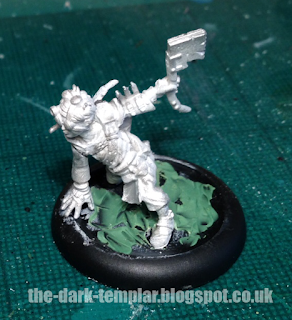 Then it came time for Boiler. I had been leaving him till last as he had two arms and a leg that needed gluing in place and it wasn't going to be pretty. Needless to say it became a bit of a pig to put together. I had to glue his right arm, right leg and main model into the base all at the same time in order to get their relative positions correct. Well I got covered in glue and limbs were falling out all over the place! Eventually I got it somewhere close to where it needed to be so I walked away. A little while later I came back and added his left arm and stowed axes on his back. I have to say that this model only needed the left arm pinning (as it was so exposed), the rest stayed in place well. 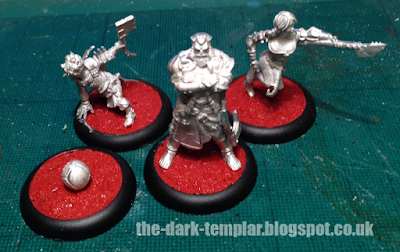 I added a bit more greenstuff across the board (as you can see) in order to fill gaps in the base slot and add some texture to the surface. Once dry I added some Red Oxide to the entire base surface.

I also have to add that in contrast to the Morticians, these guys had almost no mould lines on them and were cleaned up in no time. Brisket was the 'worst' and had a little flash next to her hair but Ox was completely clean!

Sunday evening I got another half hour to give them all a black undercoat. For the first time ever, I think, I didn't use a spray and brushed on some watered down black paint. Hopefully this evening I can give them a second coat then we're onto some colour. With that in mind I can say with some confidence that we may actually see some models with paint on this blog before the end of the week!