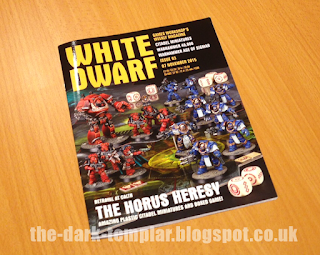 The Horus Heresy box set has been playing on my mind recently, after some online discussions. Is it the bargain of the century or is it another expensive GW cow-milking exercise aimed squarely at the space marine fan boys. I used to be one of those fan boys a decade ago and would have sold my soul to get my hands on something like this back then, regardless of price. Nowadays though I'm a little older and a little wiser (just a little) and not so easily taken in by shiny photos and beautifully painted miniatures.

I put in a cheeky request with the wife as she was leaving for town on Saturday, asking her to go to the one place she hates more than any – the local "sweaty geek shop" as she calls it – to get hold of last week's Horus Heresy edition of White Dwarf. I just wanted to see what the fuss was about, plus I had read somewhere it has a free miniature on the cover. 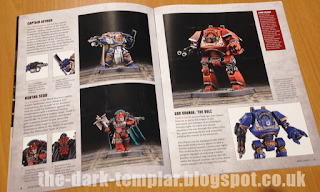 She returned some hours later and the first thing I discovered was that the free miniature was actually a free metal badge of an Ultramarine space marine – why? what possible use or value does that have? Secondly the edition cost only £2.40 which seemed remarkably cheap compared with the last WD I purchased, but then I discovered it's because there are only 34 page in this edition!

(I'd just like to say that I think this is a sad state of a magazine with so much history and heritage, but there you go.)

The 'magazine' itself turned out to be more of a glossy brochure for the Horus Heresy game, with shiny pictures and a lot of text I couldn't bring myself to read because I know it's just marketing hogwash. I had a flick through but personally was unmoved. 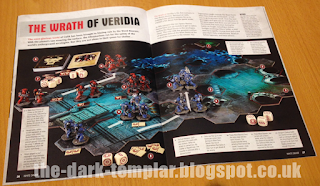 So, is the game worth it from a model perspective (assuming you're just in it it for the sprues)?

The box set was advertised in the magazine for £95 (£85 at Element Games) and for that you get 30 mk4 tactical marines, 5 terminators, a dreadnought, a terminator captain and a chaplain. If you were to purchase the same plastic models (though not heresy era of course) it would cost you £75 for 30 tacticals, £28 for the terminators and £28 for the dread – that's £130 before your character models (£111 from Element Games).

I think that's a resounding bargain, a saving of approx. £60-70 on buying regular models – and they're heresy era stuff as a bonus. So all you marine players out there… buy, buy, buy!!