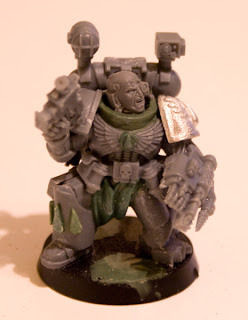 After the game against the Orks this week I felt in need of adding to the Blood Angels, and in anticipation of the new codex next week I thought I would create a Sanguinary High Priest – according to the rumours a very useful if not essential recruitment.

I wanted an action pose and started with the Salamander medic in the Space Marine codex (love the kneeling pose). I didn't really want a white helmet on the model so went for the Commander head, shouting for help/cover fire/sticky tape. Whilst I didn't want a model as bling as the new Blood Angel plastics I did want him to definitely look like a Blood Angel, as well as a minor character, so out came the greenstuff. 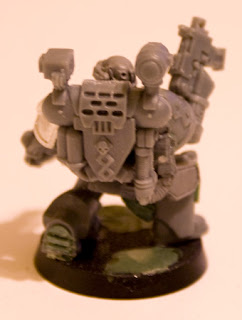 In addition to my familiar raised neckline I also got rid of the skull on the chest and replaced it with a blood drop. More blood drops were added to the lead leg as well as a tabard. As a final touch I added some tread to the bottom of his boot.

I wanted to add more, but patience (or lack of) got the better of me and I decided to stop there, which in hindsight is about right for balance – I'm looking forward to painting some white armour mixed in with the red, as well as a character very different from anything so far.

The next conversion will be my attempt at dynamic Tycho in a couple of weeks, who will be leading the line in my next battle against the Orks, his old enemy.
Posted by The Dark Templar