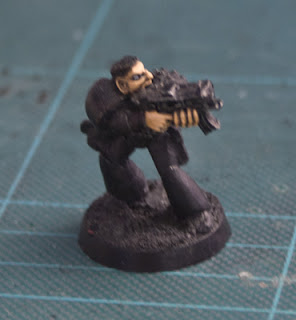 I love the classic marines. They had passion in their faces, and often the pose to match, something I have been trying to incorporate into my current attempt at army building. The model above in particular became one of my favourites for many years, and I decided to try and create a modern counterpart, given the flexibility of plastic kits nowadays. 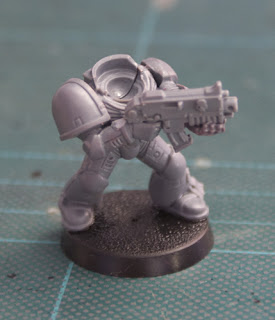 Taking into account I decided this last night, the image above was my first attempt. Taking the arms from a Lascannon Devastator, I trimmed back as much of the weapon as I thought necessary and stuck a bolter in its place. I will probably trim off the fingers of the left hand and sculpt new ones around the bolter, but I didn't think this was a bad first attempt given it took all of 15 minutes.

The next attempt will probably involve chopping up the various sections of arms and pinning/sculpting things a lot more accurately. This current version doesn't allow the bolter to come up high enough to match the classic original. I may even use the kneeling legs for variation next time.

Don't forget my March Prize Draw, to win a free Deathwing conversion – it costs nothing to enter...

..and keep you eyes open, I have something coming soon in conjunction with A Gentlemen's Ones!
Posted by The Dark Templar