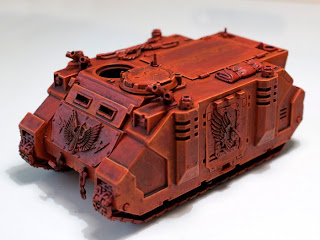 Now that I have completed my first Tactical Squad, I thought it would be a cool idea to fast track the Rhino I had started to build, so that I had a completely finished unit with transport. It also means, if finished on time, I could get a cool 10 painting points in one hit which would get me back on course to meet my yearly target. 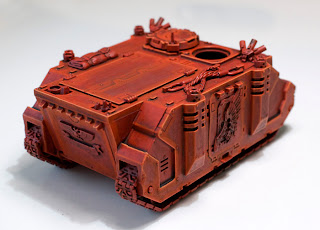 I used the same painting technique I have used for my troops, with the exception of giving the model a coat of Dark Flesh instead of multiple Blood Red/Chaos Black layers. More than anything this has saved a lot of time, although it has been tricky getting a solid colour onto all those large flat surfaces with a brush. I have no intention of buying an airbrush to do this in the future, even though it has added a challenge to the process. 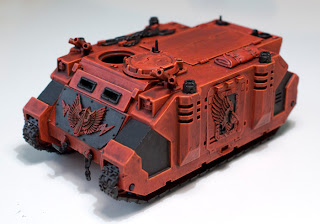 The model was washed and highlighted in the same way as the troops, before I went back and started blacking out areas that will become black or metal. There sure is a lot of detail on this model now, but I am confident of getting it finished (with large blood drop on top hatch) before the month's end.
Posted by The Dark Templar