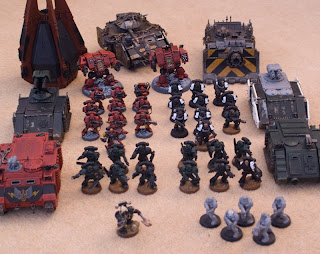 I took a photo of my 'band of brothers' last night – it's always nice to see a group of miniatures like this, see how they look together. Unfortunately (and somewhat embarrassingly for someone with my artistic and perfectionist tendencies) this particular group look like a random ebay sale that's asking for £500 but will probably go for £30. This is due to being between armies at the moment; trying to put together a playable Imperial Marine army list from the handful of new/part-painted Blood Angels and whatever surviving elements of my Dark Templar force could be scrounged to make up the numbers – on top of having exclusively been a Chaos player for the last ten years. I'm also a stickler for WYSIWYG, so I'd rather have an unpainted model with the correct weapon than a painted flamer that's meant to be a lascannon. There is also a scout unit in there that is barely built – not me at all under normal circumstances, but this game is coming a good couple of months too soon to field something to the standard I'm used to. However, today is about having a bit of fun, nothing more.

I will put up my army list as part of a mini battle-report another time, but you can see it hasn't strayed too far from the list I posted the other day. The idea being that the tacticals break down into 5-man squads, the heavy weapons staying back whilst the special weapons scoot forward in the Razorbacks. The one thing I have learned over time is not to put a unit you want in combat quickly inside a Razorback brandishing a weapon you want to be shooting every turn (like a lascannon) as the two concepts are in conflict – hence the assault troops are in rhinos. Other elements are in there for me to try new rules, such as drop pod deployment and outflanking scouts. You'll notice I've taken nothing with funky new rules, such as special characters, to keep things simple and the game flowing. Both my opponent and I suffer terribly from MES (for which Col Corbane has some suggested cures) so the simpler we can keep things the better.

Next time of course I will have the new Blood Angel codex to work with, and I'll have more special rules than I know what to do with, but for today it's all about simple fun. Expect to see some action pics soon.
Posted by The Dark Templar