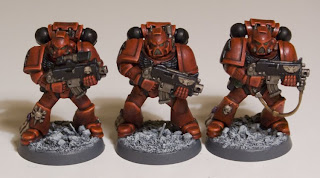 The first painting points for March finally land, also signalling the completion of the AoBR Tactical squad – yeeesss! I'm quite glad they're done, although the three remaining Terminators are waiting impatiently. 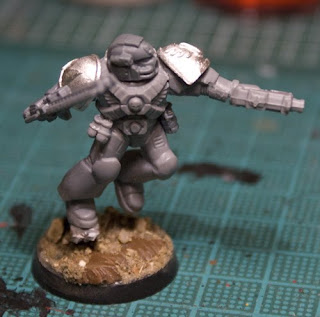 As well as the Space Hulk Terminators I mentioned yesterday (who are now stuck together, and to bases, with a 2 pence piece underneath), I also got a couple of the Assault squad guys built. 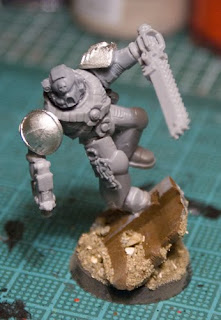 The whole idea of this squad (so far) has been to build on the pose of their Sergeant, making some dynamic looking models, mid-action, without going over the top. You may have seen the legs make an appearance a few posts ago. I also didn't want to do too much converting as they are only rank and file troops after all.

Aside from the codex itself I've decided not to buy any of the new Blood Angels models at this time. I'm not terribly impressed with the releases, and I have lots of marine bits still around the house – the whole point of this army was to use up my extensive bitz collection, and not spend any money (or as little as possible) turning these guys into a playable force. I guess I just got caught up in the excitement!
Posted by The Dark Templar