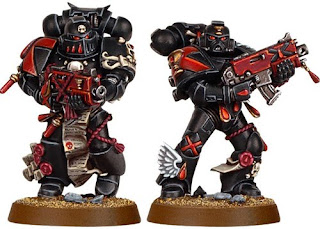 Now that the cat is truly out of the bag, and we have quality pics of the Blood Angel advanced orders at the GW website, has my opinion of the new miniatures changed?

The Sanguinor
I still think the pose is wooden – has he got a broom pole stuck down his sleeves? – his arms and legs are WAAAAAY too straight, which is a real shame as it looks nicely sculpted.

Astorath
Loving the armour, but that could be the Bezerker in me. As per my comments yesterday, he looks a little awkward but I can see me hacking this guy into some kind of conversion.

Seth
This is what the generic Chapter Master minis should have looked like - a shouting head! Whilst I quite like this guy, and he could be the only purchase (ironic since I'm not collecting FTs) from the HQ selection, I still think he's looking far too casual for the Chapter Master of the Flesh Tearers – not nearly brutal enough.

Lemartes
He's growing on me a little. Still far too laid back and passive, but with the arms and base cut off, and what's left positioned in a different way there is a lot of potential. Hmmmm.

Vanguard Veteran Sergeant
OMG!! Awful, awful model. Got a scouts head, ballet dancers pose, dislocated sword arm, and clown shoes. Why oh why would you pay £10 for this.

Sanguinary Guard
The Standard Bearer looks like he's about to fall over, and a couple of the other guys look like they've had their legs tied together, but there are some lovely bits in this kit. I think this will have to be on the shopping list.

Death Company
Only 5 in a boxed set for £20!! Outrageous when the unit is 3-30 (allegedly).
Again some nice bits in here, and probably my favourite release, but it too has some dodgy legs in there, one tripping over his scrollage (see above pic - twisted his ankle?). Definitely on the shopping list.

Baal Predator
Like I'm not going to have one of these eventually! Just a bit of a shame there's not more decoration for the vehicles in general.

Rather gutted there is no plastic Furioso – no chance of me buying a metal dread with all those plastic kits kicking about. Overall I'm a little disappointed, like the time I wanted the Millenium Falcon for Christmas – I got myself worked up into a frenzy on Xmas Eve and my Mom got me some cheap lookalike instead. I took matters into my own hands 20 years later and bought it myself – I may have to take matters into my own hands this time too!

I have to say though, after seeing the anorexic Space Wolves (how skinny are their thighs?!!) these are much better sculpts generally. I think it says something when Jes Goodwin's marines still stand head and shoulders above a lot of the new releases, some of them 10 years after they were sculpted. He sculpted an awesome marine bare head in the first release of the Tactical boxed set, full of passion and drive, and no bare heads since have come close.

I wondered whether I was being too critical, but I've concluded that I just have quite high standards, and expect more 'considered' creativity when a price tag of £10+ per model is shoved in my face. Needless to say I will probably be spending a small fortune come April!
Posted by The Dark Templar