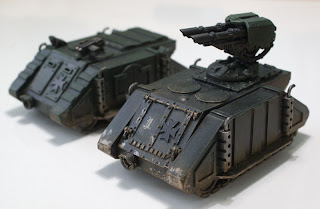 I have a game booked in for next week, with my best man, and must admit to being quite excited about it. The invite was to give my newly painted models a run out (read: kill all the nicely painted stuff that haven't been killed before). I was thinking about what army to take, lists, etc. and given the fact that the new Blood Angel codex is due to land in little over a fortnight I see little point in using the current BA list. I also have a huge restriction on available models (I play Chaos!) so that too will impact on my list.

So, this morning with a cup of tea I sat down to scribble some numbers on a page. Given I know my opponent well I can assume/guess the following:

1. Despite having large Dark Angel and Imp Guard armies he will likely field his true love – Orks!
2. Given the banter on the email this week I am likely to see more than a couple of shiny new Dreds/Kans.
3. Neither of us have played much 5th Edition, so the chosen mission will likely be the "let's just kick the crap out of each other and see what's left after 6 turns" strategic mission, which you will find exclusively in my biro-amended edition of the 40k rulebook.
4. Given the fact that my opponent's Ork army is huge, he's unlikely to want to play a 500 or 1000pt game – 1500 points it is then.
5. This will be a friendly game of 40k (ha, ha, ha).

That all sounds straightforward except I have no flamers in my collection (except my new BA Tactical Squad), and most of my marines are geared towards a Black Templar close combat army list. We may need reinforcements! First draft of the army list looked like this:

...I then went to dig out the chosen models from the attic, haha!

The Heavy Support choices would be supplied by my Iron Warriors (they're so fickle). I discovered I no longer have a Scout HB or enough intact combat troops for the Assault Squads. In addition I could not find my Twin Las Dread. To top all that, I had just started repainting my Dark Templars as Black Templars when I put them away, and didn't get far past the Black undercoat. All of which leaves me with a few dilemas.