Game Day: A tale of Gentlemen and Ones

As you may know I had my first game of 5th Ed yesterday (first game in ages at least), and a very enjoyable afternoon it was too (pausing only for an essential bacon sandwich and the odd delivery of household furniture). Let me just say from the outset that perhaps aligning myself with BSmooth at A Gentleman's Ones recently has had an adverse affect on my gaming, hehe, which will become clear later ;)

On to the game itself...

As suspected I was facing Orks, with a Big Mek, two Deff Dreads, six Killa Kans, Vulchas, Kommandos, Deff Koptas, a HUGE unit of Boyz and TWO special characters. I, on the other hand, had a group of individual units so rag-tag that they would not look out of place in the Battlestar Galactica fleet. To say I came unprepared is an understatement, as I knew would be the case (my opponent reads my blog too!). What did throw me was the complete absence of any Ork transport vehicles, so I figured I had time to take down the Koptas and damage the mech before everything reached my side of the board.

I won the roll but gave the Orks first turn (mistake #1), who deployed in a balanced formation across the board (Vulchas and Kommandos in reserve). I elected to hold my Scouts in reserve (mistake #2) to try the Outflank rule and see if they could cause problems later in the game. I also had my Multimelta Dread waiting in his pod.

I chose the classic Refused Flank, to try and take one group of mech out of the game (or delay them at least). However, I knew the Koptas had a scout move, and with all those rokkits could cause a problem. 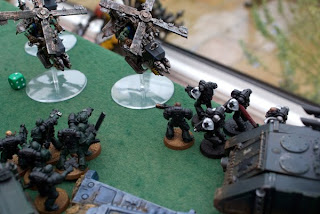 As expected the Koptas used their scout move to fly down the flanks and positioned themselves for maximum effect. On my right they did no damage, on my left they took out my Predator – not happy about that. In the middle of the board the Ork horde and mech ran as fast as they could towards me. 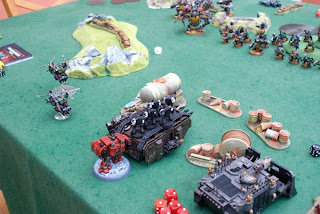 In response I jumped a couple of units out on the right to gun down the ineffective koptas – including the melta guy – taking down one with the vehicles accounting for another, whilst on the right pulled back a unit into the smouldering ruins of the tank and swung my gunnery dread to face the cheeky buggers who had taken out my pred, also taking out one kopta. Elsewhere the Vindicator dropped its pie-plate on the large Ork unit killing 5. 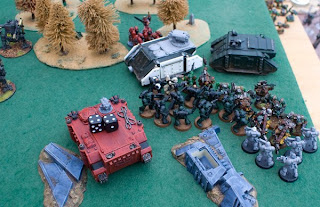 The Ork masses continued their sprint across the board, looking ever menacing but still not yet a threat. On the right flank, as the remaining wounded kopta bugged out, a unit of 15 Kommandos let by their special character (sorry don't know his name) appeared and immediately charged into my exposed troops. The melta guy and his unit fell, the other 6-man assault squad was down to half strength. 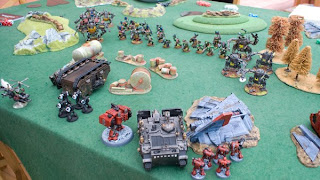 On the left, the Dread and unit fell back to avoid being leapfrogged by the ineffective koptas, and managed to take another one down in the process. The vindicator continued to drop templates, and ork boys continued to just drop! The 5-man tactical unit in the centre fell back to avoid the easy assault charge next turn, and on the right the scouts turned up to support the Chaplain's counter attack into the kommandos, wiping them all out. 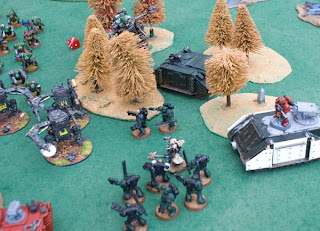 The Ork mech was virtually on top of me now, as the last of the koptas were dropped, as a Deff Dread crashed through the trees to torch an exposed 5-man unit, killing two. The Kans couldn't get to the Chaplain through the wall of vehicles I'd created, so I decided to charge them once my assault turn came around. 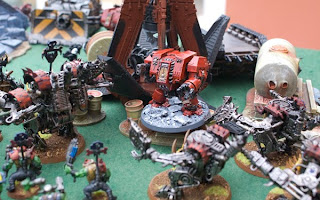 In the middle of the action the Multimelta Dread crashed into the Ork line (having scattered way off course) right behind the other Deff Dread. What a fantastic opportunity to stick a melta shot up his backside (taking into account it had shrugged off FIVE strength 8+ shots thanks to my dice rolling). 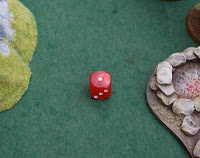 However, maybe it was my lack of game practice, or maybe the Gentleman's Ones were with me, but I rolled the inevitable. This of course left the impotent Dread surrounded by mech, and looking very much like he was caught with his pants down. 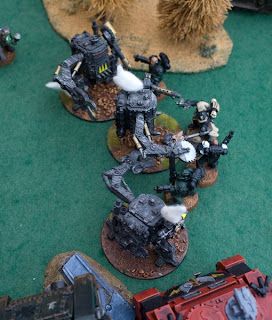 Having barely survived assaulting the Killa Kans (mistake #3 - forgot maines now have krak grenades), the Chaplain and his remaining crew continued to duck life threatening attacks and stick a fist in where they could. The Kans weren't dropping though. 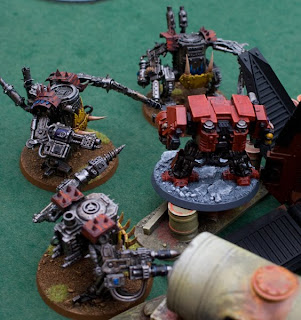 Elsewhere, the fire-immune Deff Dred ignored the Drop Pod and its contents and charge at the Vindicator, ripping off both guns. The Multimelta Dread was left surrounded by Kans, so just went at them mashing one then waited for the impending (simultaneous) payback. 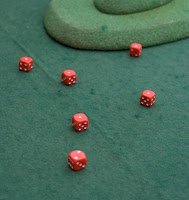 Alas my opponent had also contracted the curse of the Ones with one of the most incredibly awful rolls I've seen in a long time – SWEET! 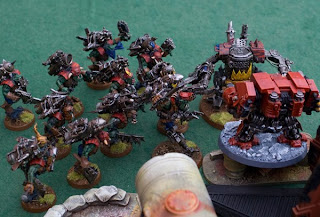 By the time turn five came around the Multimelta Dread was left facing a single Kan, but the Vulchas (who had arrived last turn and scattered way off course) dived in to support and their special character's funky claws took out the big man. 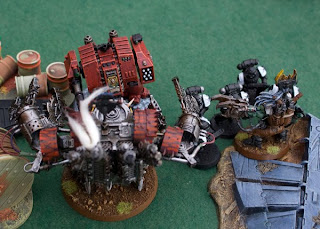 In the middle of the park the Deff Dred took down the gunnery Dread (who had missed point blank with both weapons at the DD's backside – one blessed piece of mech). The nearby 5-man unit took out the sole surviving Big Mek in combat (his large unit of boyz being torched and gunned to pieces in the previous turn).

On the right flank, the Chaplain and Power Fist Veteran Sergeants finally succumbed to the last remaining Killa Kan, who had been joined in combat by the other Deff Dred.

Not much left in the table, so we called it quits.

This was always intended to be a fun game that got us back into playing and using the 5th Ed rules. My army list (supported by key mistakes) was not equipped for dealing with this Ork army easily, and after Turn Two I thought I was going to die very quickly. However, a few heroes stepped up to hold the line and drag the game out to Turn Five. In an army full of very ineffective dice rolling the Chaplain managed to make 3 invulnerable saves on the bounce to ensure he stayed fighting against the Killa Kans. After making the worst entrance ever, the Multimelta Dread pulled things around, surviving three rounds of combat aginst the Killa Kans – killing two and turning the third into an immobile, armless statue – before being taken down by a one hit wonder special character roll, which was unlucky.

So the biggest laugh of the day was the dice rolling, with both sides having an enormous amount of bad luck ( I rolled 6 ones in one round of shooting just 8 weapons) with even the armour pen rolls being low overall. Seems gentlemen do roll ones, but in our case just not when it would be useful!
Posted by The Dark Templar