Just to break things up a bit I thought I would show you what is on my paint table at the moment... 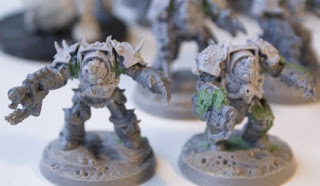 As I mentioned in a previous blog, this was my tournament comeback army for 2009, which didn't happen. I bought all the bits, but didn't even construct a single model. During December I decided to make a concerted effort to get back into the models, so I dug these guys out of the cupboard and started building.

I have concentrated on the Terminators, probably because there's only five of them and the models are just amazing. I couldn't leave the legs as they came off the sprue so I've been trying to get them on par with the Forgeworld torsos. I bought some 'possessed' resin bases from Dark Art Miniatures to add to the effect, my only problem was drilling room for my 'penny weight' (I always weigh down my models with a 1p or 2p coin in the base if at all possible - makes a big difference!) which has turned out to be a nightmare. 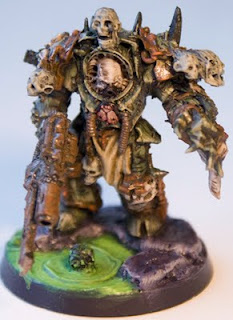 I always take one model through to completion if possible, to test colour schemes/ techniques/ etc. for painting up the rest of the army. This time I chose the Champion model who is almost finished. Not happy with the green goo on the base - although it looked how I imagined, it's too cartoon-looking for the mood of the model itself, will probably go for a dirty yellow/brown instead.

I did have a couple of units of Lesser Daemons in there instead of the fourth Plague Marine Squad, but it was too light on units that could hold objectives. I also appreciate I have no long range shooting, which goes against the grain being a former Iron Warrior general, so I may drop the Greater Daemon and try and get a tank or some Obliterators in there. Need to get some bodies painted up first, then I can tweak!
Posted by The Dark Templar