So last summer I decided that I wanted to give the Dark Templar another go, but properly this time. I spent a lot of time contemplating colour schemes and icons – I didn't want them to just use the Black Templar stuff in a different colour (that would be faaar too easy ^^).

The concept for the look is primarily Mk 6 armour. Trying to represent what the RTB01 marines would look like if they were released in 2010. This look is what I was first introduced to when I 'discovered' Space Marines, and it is creeping back into some of the current sculpts which is great to see.

I picked out a few key elements that I wanted present on the rank and file troops:
• the piped chest piece
• no knee-pads
• banding sculpted into the feet
• shoulder pads with no lip on them
• left shoulder pads studded
• an older looking backpack
• and of course beakie helmets

Characters and key models will obviously have license to stray slightly from these guidelines or have artificer armour, but these are my golden rules for the majority. 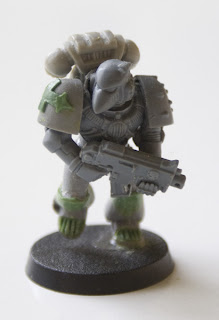 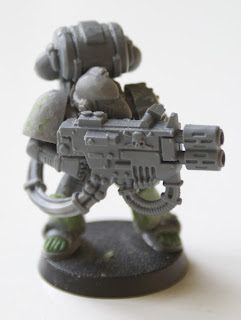 Having made my decision I did a mass scrounge/trade with everyone I knew to get the bits I needed. A lot of sculting is going to be required so I set out to do some test pieces. 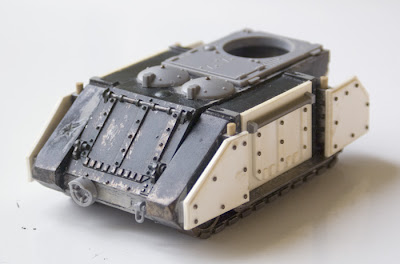 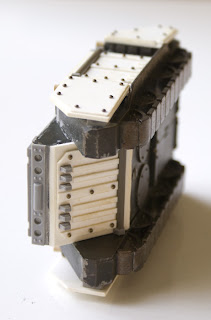 To make things even more complicated I don't want any of the newer looking vehicles. This could be problematic down the line, but I want the army to look very retro and the new-look tanks would kill it. I started to convert one of my old Rhinos.

Things stalled at that point with my wedding/honeymoon/work taking the front seat and I haven't been back to them yet. The plan is for my little Blood Angels project to get me back into full swing and up to speed with my painting so that I can hit the ground running when I return to the Templar.
Posted by The Dark Templar