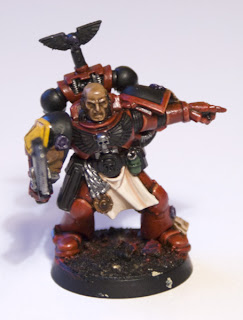 So I've been at this blog for almost a fortnight now, with an over-enthusiasm that is to be expected when a child discovers something new and exciting. No doubt the pace of my blogs will drop off as the weeks go by, but I fully intend to have at least a once-a-week update.

After reading some great posts on other people's blogs I have decided to adopt the Painting Points Challenge that is currently doing the rounds – taking it a step further like Erik A from Berks Warhammer 40k and giving myself a monthly target to aim for. I need this kind of structure to stop me getting distracted now that I don't have a weekly gaming club that I can get to.

I am so close to my first painting point that I can taste it – as you can see the Blood Angels Veteran Sergeant there is almost complete, just a few details to finish now. Just when I think I'm getting there I find something else that needs painting on him! I even found space for some yellow paint, but not happy with how it went down – it'll do for this guy but will have to get some help from the experts I think, ha.

The Dreadnought arms are not far behind. I have the Terminator Sergeant ready for final detailing, then to complete the list, the Dred body and four Tactical marines with their red armour done and ready to be tidied up and detailed. I have promised myself not to look at anothiner miniature until these guys are done – anything bright and shiny and I'm off track! 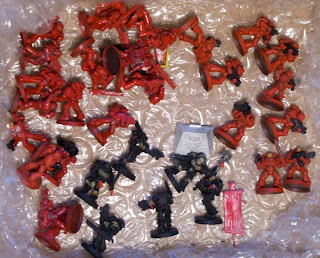 I had a bit of a scoop last weekend to help bolster this new army. I was given a donation of Blood Angel figures by my best mate, stuff left behind from when we had a regular gaming night. The figures used to belong to one of the guys who has long since left the hobby. Thanks Kev!

The collection is a real mixed bag, with some figures victims of the spray can (I didn't know you could get so much paint on an individual figure without thinking "hang on, this doesn't look clever"). There is a couple of Tactical Squads in there, an Assault squad including the Honour Guard medic, some metal bits and most importantly...a 5-man Death Company.

In other Blood Angel Project news, I made my first purchase this week – some metal BA shoulder pads – after a decent Ebay sale or two. These will go with my next Troop unit, whatever it may be, so that I don't hand to paint or decal any more icons. I missed out on a couple of auctions for BA characters, but with hindsight have decided it's better to hang on until the new book before shelling out on ICs, they may change completely.
Posted by The Dark Templar