In between posting about my current project and thoughts I will take a look back at previous armies I have built so that I can (a) share them with the world and (b) force me to find any photos (or re-photo them) and act as an informal record. To begin with I'm looking at my first Dark Templar army.

It was whilst purchasing the metal Command Squad boxed set I was asked an obvious question - Which chapter are you going to paint them up as? - I hadn't actually thought that far ahead! I decided that I wanted to paint them as my own Dark Templar chapter, but use the colour scheme from the old Rogue Trader Salamanders which was Dark Green and Black and Yellow. Later I decided to drop the yellow, even though this meant there was no contrast colour and they all just looked dark and muddy.

As new models were released I bought them, doing very minor conversions now and again, and collecting a rather eclectic and unplanned set of miniatures. When it came to my first tournament I put together what I considered a decent army based around the models I had and the new Black Templars list in the Armaggedon codex - taking into account I had read all the rules to death but played precisely three 1000pt games!

The week after the tournament I had learned three things: My army played like crap; My army was painted like crap; I was really getting into this hobby big time!

I learned loads over the next 12 months from chatting to other gamers. Although my painting didn't improve much, my gaming did, as did some of my conversions. I went all out to win best miniature trophy (seeming only capable of winning most sporting player up to that point!) and spent weeks converting a Terminator Captain into a real combat monster that looked awesome. My efforts paid off and next tournament I came home with my target silverware. I even won more games than I lost! 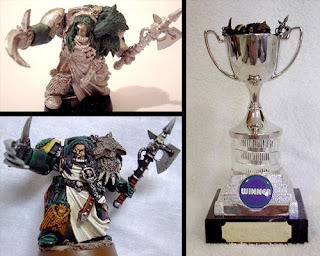 Just as I was starting to find my feet I discovered the Chaos codex, and things would never be the same again! I played a couple of tournaments with my Dark Templar as Chaos marines, and my aforementioned heroic Terminator Captain as a Chaos Lord, and the results were very positive. Then White Dwarf started releasing Index Astartes lists for Bezerkers, Thousand Sons and the like - it was time to move on.
Posted by The Dark Templar