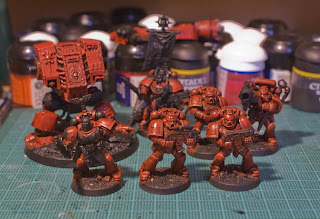 Like a lot of people I have enjoyed the recent Tale of Four Gamers article in White Dwarf. I like the idea of building a new army in this way as it keeps things structured and gives you manageable goals, with a real sense of achievement in a relatively short space of time. I did prefer the very first Tale of Four Gamers many years ago, which was based around Warhammer instead of 40k and gave the likes of Paul 'Fat Bloke' Sawyer £50 to start and £25 a month after that – not that £25 would buy you much these days! – it just seemed more structured than the "paint what you like" version recently.

I decided to start a new army in the Tale of Four Gamers style but with a big twist – given the fact that I have no spare cash to be spending on models, the army has to cost nothing!!...(or as near to nothing as possible). Luckily, thanks to my days of heavy spending and gaming (for which I am now paying – lesson to be learned there kids) I have boxes of leftovers, bits, half-built models to get me going. Any money I do spend has to be generated by selling other model-related bitz on Ebay.

So which army?
With the current rumours about the new Blood Angels codex in April there was never any question (the rumours triggering this sudden, temporary change in alligiance from Chaos). From the day I first picked up Space Crusade, and my first RTB01 marines, I have always loved the idea of Blood Angels, and always wanted a full on army. However, for many years Chaos was the power on the gaming table and it never happened. 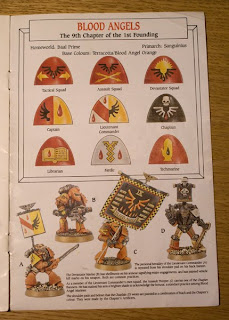 I have started with the marines from the Assault on Black Reach boxset. The Captain and Dread had been painted up in Salamander greens, but have been re-undercoated. Hopefully I can get this little lot done over the next few weeks – I already have my next group of models ready to go!

Stay tuned for more, including a mini guide to how I paint red!
Posted by The Dark Templar