My first real army came about after the launch of 3rd Edition. Jes Goodwin's metal command squad sparked the renaissance after I had lost interest during the cartoon colour schemes of 2nd Ed.

I moved to Tunbridge Wells in 1999, and had a local GW store of my own at last. The release of the first Black Templars codex sealed things, as I took my eclectic group of miniatures and put them into some kind of order. I entered my first tournament in January 2001 with my BT list painted up in my own Dark Templar scheme (Dark Angel green and black). I went back to the same tournament several times, met lots of frothing tournament players, and was slowly led down the path of the power gamer. 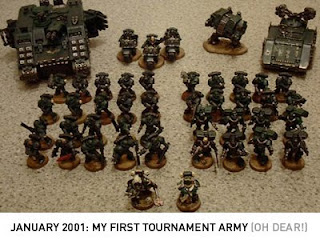 It wasn't long before armies were being devised and built specifically for tournaments, and the 'Jedi Council' years began. This cutthroat team of power players dominated local tournaments for a 2 year period - the kind of people you hate to be drawn against. We won a lot of trophies. I got addicted to winning, and created nastier and filthier army lists, peaking in 2004 with my 'Beastman Bezerkers', which had me undefeated in the GT Finals that year.

After that I went back to my beloved Iron Warriors, which had mutated into an Apocalypse sized force, years before the book was ever released. They were pretty sound (without being outrageously beardy) for the remainder of my tournament career. In 2006/7 real life took centre stage and I retired not only from tournaments but 40k generally, and made some cash on ebay.

In 2008 I moved to Folkestone, and my only hobby was World of Warcraft which I'd been playing for 3 years. I was now addicted to that, and my life was slipping away doing daily quests, grinding rep, and raiding. I decided enough was enough, and wargaming was much more creative and rewarding than just sitting in front of a screen. I had no desire to go to tournaments (although the set-in-stone deadlines are great for productivity), but wanted to get back to building and painting. I started to read some 40k novels, my ultimate goal to create the Dark Templar chapter I'd always intended.

It's just turned 2010, I have a host of forgeworld Nurgle dudes on my painting tray (my 2009 tournament comeback army that I bought and never started). These days not spending much money, if any, is a priority - luckily I have boat loads of bitz from the old days and a vivid imagination! Did I mention I'm a perfectionist too? Let's see what we can build, eh?!
Posted by The Dark Templar