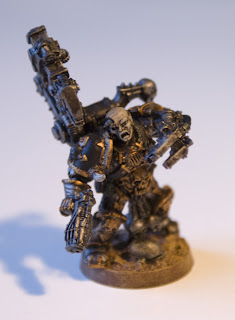 Many moons ago I saw a conversion done by Graham Davey (in WD or maybe an old Chaos codex) that used the body of Kharn and the bare/bionic head from a metal Chaplain. I really liked it, even though it was painted as Black Legion, and took it as the basis for my Chaos Lord when I first started my Iron Warriors. When it came to taking my IW to tournaments I wanted to upgrade to a Daemon Prince, and liked the idea of my guy being elevated to daemonhood.

The new Daemon Prince model (at the time) was so awesome there was no decision to be made when choosing where to start. He had to have wings and a daemon weapon so I ordered bitz from the classic Daemon Prince via GW mail order (do you remember those days when you could order bitz?..sigh). The wings were pinned in place and blended in (quite poorly with hindsight) using greenstuff. The Daemon Sword was removed from the Prince's hand and the axe pinned in place – a plastic chaos vehicle spike was pinned at the other end.

For the bionic arm I had ordered Ghazghkull's arm, which was a perfect fit and posed to match my Lord figure. I used a little greenstuff on the Prince's head to create skin edge so that half of his face was bionic, again to match my original Lord figure.

This Daemon Prince model has gone on to lead my Iron Warriors in many tournaments since, including several GTs. His bark was always worse than his bite, and his perceived threat (especially sitting behind my line of guns) has been a very successful tactic against all but the cleverest of opponents.
Posted by The Dark Templar