At the end of part 1 I had all but completed the fire dragon – just the horns to add. 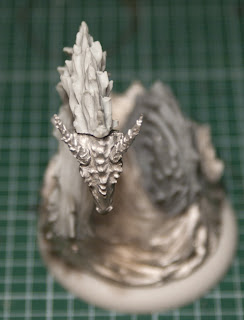 I'll hold my hand up now and say I was lazy. I decided not to pin them, just glue them into position. I filed the ends free of excess metal and opened up the holes on the head but they weren't a great fit. Deep down I'm convinced they will break off at some point, however when I tested them yesterday they seemed pretty solid, so what do I know. 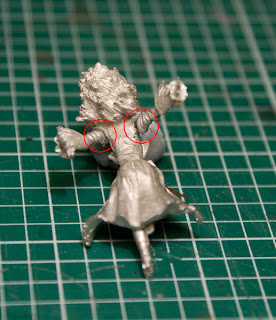 On to Sonnia herself. She is a very delicate model to say the least – reminds me of some of Rackham's females from Confrontation with tiny, tiny feet. Her arms were separate and it's taking a while to work out which arm should be on which side. I have pinned them on twice and I've discovered this morning it's still wrong. The problem is that they are twisted and at an unnatural angle so don't look right either way. Bottom line is I don't think it really matters in this instance.

I trimmed the shoulder end of the arms flat and drilled a hole, then used the socket already in the shoulder as a starting point for the hole there. I did manage to drill through the arm on one side!… the drill bit re-appearing by her wrist (more greenstuff work). Neither arms had a good fit – see above photo – despite my best efforts and will need filling.

I positioned the Sonnia model against the fire dragon, trying lots of different angles to get her to sit comfortably and match up to the blast of fire she was meant to be breathing. I have no idea how the guys at Wyrd made up the original as the angle of the fire spout is too vertical to match their photo. 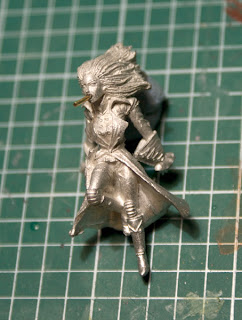 I decided the best way to anchor her to the base was via the fire spout so I drilled a hole into her mouth and added a pin like a huge cigar (or insert innuendo here for all the potty minds). This wouldn't be enough on its own to fix her to the base model securely, but it would provide the backbone and ensure it did look like she was breathing fire. A corresponding hole was drilled into the fire spout itself (which to be honest crumbled away – not convinced about the quality of the resin, too much filler maybe). 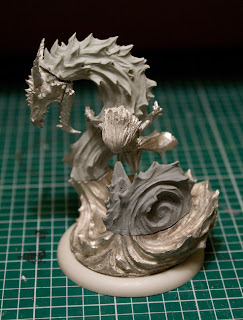 I was hoping to paint the Sonnia model separately from the dragon, but due to the tricky pinning and greenstuffing involved to ensure she doesn't fall off I've pretty much decided that I will have to build the complete model then paint it as best I can later. 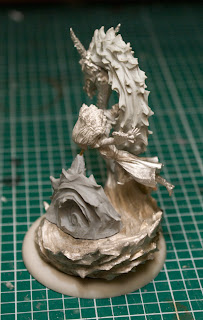 The next stage is to decide where to add additional pins to secure Sonnia to the dragon, then the massive task of filling in gaps. I have to say that, despite how much I love the model and concept, I'm a little disappointed with the production quality of the piece. This has not been an easy build so far and I would fear for gamers with less pinning/building experience – this model would simply fall apart without the heavy pinning. 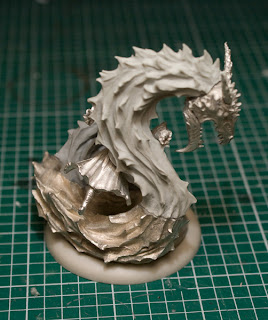 I must add to that – I'm reeeaaaallly looking forward to painting it!

Read Part 2a here
Posted by The Dark Templar