I've known the guys at Critical Mass Games for many years. They're based in my hometown of Wigan in the north west of England, but ironically I didn't meet them until I had moved 250 miles south to Kent. They have always been what I considered 'real gamers', the kind I spoke about in my Malifaux intro a few weeks back that don't get hung up on individual games or companies and will pretty much play anything if it looks like fun. 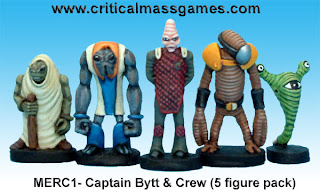 So it wasn't (much of) a surprise when I discovered that Craig and Dale had set up Critical Mass Games and were developing rules and figures for a 15mm sci-fi tabletop wargame. I have seen (from a distance) the company and game system develop and grow, visited them several times at the Salute show in London, and got sneak peeks and behind the scenes exclusives whenever I visited Wigan. 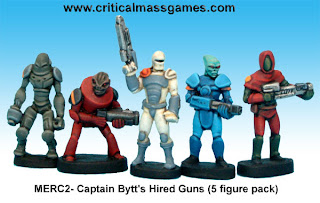 Being a graphic designer by trade I've been eager to help them out when I can. Whilst most of the groundwork was already being done by their artist Rob, I've managed to add my own thumbprint in there by helping to develop their logo and packaging and (eventually) the new all singing and dancing rulebook. 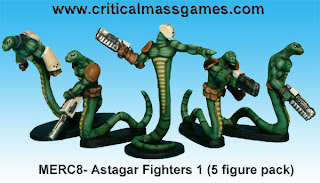 In addition to creating their own rules they have tied in with Robin Fitton's 15mm Gruntz skirmish rules system, which gives their fantastic miniatures even more application. I mean, how cool are some of these Mercenary miniatures?! 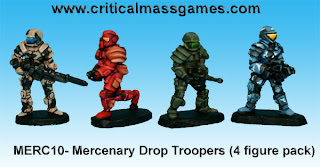 Talking of which, the Critical Mass Games website is running a 20% SALE on the entire Mercenary line of figures at the moment, so it is an ideal opportunity to pick up some of these cool minis. All bias aside, I am looking at the possibility of adding some unique looking totems to my Malifaux crews – you don't have to only use them for 15mm games!

Their full line of Mercenaries can be found here, although I strongly recommend you browse the entire site; they have some great vehicles, building and terrain and I know for a fact that the casting quality of these models is fantastic! Just ask Doc Bungle!
Posted by The Dark Templar