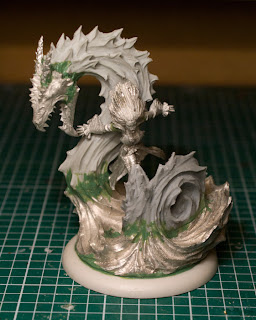 I spent some time adding greenstuff…well, pretty much everywhere to be honest. The various pieces of the dragon were out by up to 2mm in some places so a lot of attention had to be paid to this. I also added greenstuff to Sonnia's shoulders, now her arms were on the right way! 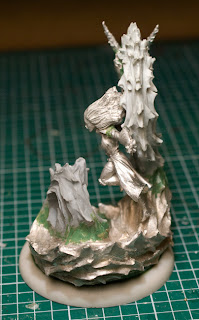 I was struggling to find a satisfactory place to pin Sonnia so I tried a different tack. I removed the "cigar" pin I'd previously added to her mouth (slightly squashing her nose in the process – a trip to the plastic surgeon is now on the cards!) and simply tried to find a solid angle to pin her to the dragon's neck – I would worry about the fire spout later else I would never finish this model. 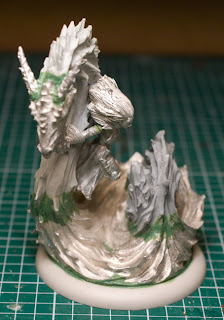 Looking at my reference image from the previous post I concluded that the only place that could hold a decent pin was the back of her head as it was snug against the dragon's neck. This was added and her ladyship was finally glued in place! I had trimmed a little off the dragon's chin to accommodate Sonnia's hand, and I added a little superglue here too.

I trimmed more of the fire spout away and drilled a hole in anticipation of the next – final – stage.