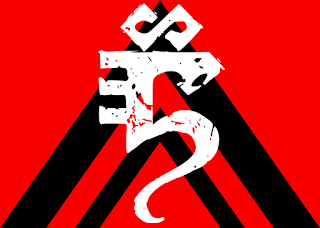 As the painting of my new (revived) Eldar continues nicely, thoughts naturally drift towards the creation of a usable army list, and the contents thereof.

We're using 4th Edition 40k rules and any legal codexes/lists from the time, so I don't have to concern myself with flyers or big mech (the things that broke 40k for me personally). Also some of the point costs, rules and units available are different from the most current codex so I need to be thinking retro. Luckily I only have 400 points to spend as part of our 40k in 40 minutes reintroduction to the game so doesn't give too many permutations to get bogged down with. But what to take in my list?


First of all I must take a Troop choice. Whilst I could take some Dire Avengers, I've gone down the traditional route and decided upon a unit of 10 Guardians with a support weapon platform and attached Warlock. This is what currently resides on my painting table (lucky that!) and is not too far from being tabletop ready. Tick.

So that leaves me approximately 265 points to spend on whatever I like from the codex. Just to confirm, I decided to use the 4th Edition Eldar codex rather than the 3rd Ed or mini-dex lists (which were all legal with 4th Ed 40k rules at various times). 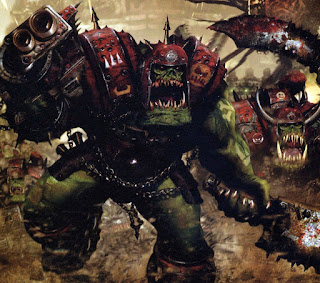 However, the one fly in the ointment is that I'm not allowed to take any vehicles with a combined armour value of more than 33. This means that Wave Serpents (my main transport option), Falcons (my other transport option) and Fire Prisms are not available to me. That's a pretty big blow and leaves me rather static. However, Vypers are available to me and they're cheap(ish) and very fast. That would give me the fast element that I'm after... it's the Eldar way after all.

The other thing to think about is that I will be facing Orks (at least initially) who will have cheap, fast vehicles and transports themselves and be awesome in combat. Do I try to out fight Orks in melee? Do I ignore melee and concentrate on shooting the Orks to bits? Do I go for a balanced list against the greenskins?

The other units of note that I can include in my 400 points are:

Wraithlords
Back in the day these were near untouchable - they could deal out a lot of death and took a lot of hits to take down. It would draw some attention if positioned well and force the Orks to spend turns of shooting/melee trying to take it down (turns not spend shooting/assaulting other things).
Edit - as noted below in the comments, Wraithlords are off the table due to having 3 wounds!

Wraithguard
These are basically Toughness 5 space marines with a cannon of death. Overkill against Orks perhaps, but if there are Killa Kans and other nasty mech they will go through them like tissue paper. They do require a Warlock or Farseer to be close by or risk stopping in their tracks. They're also very expensive, so would leave very few points left for other things. 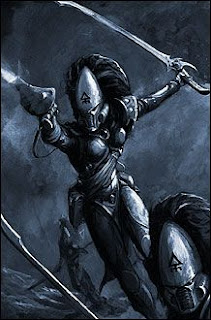 Aspect Warriors
Banshees or Scorpions would be a superb melee option. The only problem is that they will always be outnumbered against the Orks and have relatively low Toughness so will drop easily in a greenskin ruck. Reapers, whilst expensive, would make a great firepower base, but the AP3 of their weapons is wasted on Orks. Hawks and Spiders inject some jumping around 'slippery-ness' to play with but I'm not convinced their weapons are decisive enough when the crunch time comes.

Rangers
I love Rangers. I've faced them many a time in tournaments and they can be a pain. However, I'm not convinced they would tip the balance against a horde army like Orks, and certainly not at this point size of game. In a game where the objective was claiming objectives then they would come into their own.

Guardian Jetbikes
The speed injected by the inclusion of jetbikes could make a massive difference against an enemy I don't really want to be engaging with in melee combat. They are a Troop choice so could even replace my Guardian unit already chosen. However, at 22pts per bike I could only take 4 bikes plus Warlock for the same cost as my 10 Guardians plus weapon platform and Warlock choice I have at present.

I've certainly got a lot to think about, but need to make decisions soon.