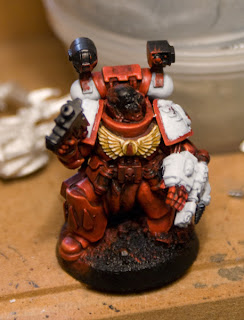 It's been a slow week on the painting front as I have spent any spare time getting the next stage of my Malifaux terrain complete.

I have however managed a little time to put the next few colours onto the Sanguinary Priest that was featured oh so long ago on this blog. His shoulders and left arm had been painted codex grey already so I spent some time laying down the white. I do intend to go back and add a little codex grey to add some shading but it's pretty solid at the moment. I also got the eagle feathers on his chest painted though this too needs a wash of yellow to add some depth. Hope to get him finished in the next few weeks so he can earn his keep on Ebay. 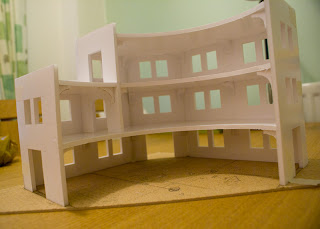 As for the Malifaux terrain, last post there was just the basic shell of my Guild HQ building. First job was to fill the gap by the front door with Polyfilla. I took the pieces cut out of the windows, stuck them together in twos and squared them off. I then cut out a curve (I drew around a plastic base for the shape) and used these pieces as supports for the floors. I do need to add a small arched wall on the ground floor but apart from that we're up to the decorating. I plan to design and build a basic window frame that I can cast up in resin (don't fancy scratch building 32 of them!). I will build the doors and door frames individually, then there is the decor on the outside, ladders, stairs. 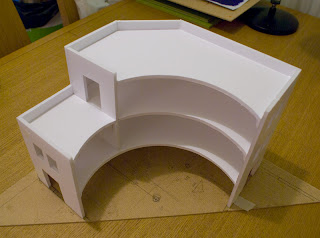 I'm still contemplating a colour scheme at this point and am torn between doing something quite straightforward or going for a gritty "dead of night" feel and only add sparse highlights with an airbrush as if lit purely by streetlamps. We will see.

I could also do with creating some "easy win" buildings that aren't the mammoth construction project that this is turning out to be!

I am away in the North of England for the rest of the week doing DIY for my Mum and catching up with friends. I hope to get a game or two of Malifaux in so there may be a post later at the weekend. Aside from that it's going to be a slow week on the blog and I'll be back on Monday.
Posted by The Dark Templar