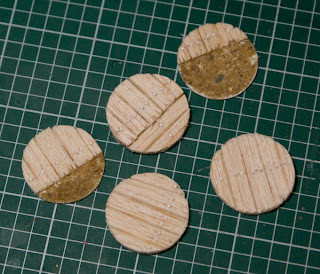 Like many Malifaux players, I've become quite obsessed with the bases upon which my crew are placed. Having used cobblestones from Fenris for my Lady Justice crew I felt in need of something entirely different for Perdita and the Ortegas, who are basically cowboys.

I couldn't find anything that really grabbed my attention. The bases available were either very plain or way too over the top, and none seemed particularly suitable for cowboys.

So I decided to make my own.

Not only that, I thought I'd make them for everyone else too. 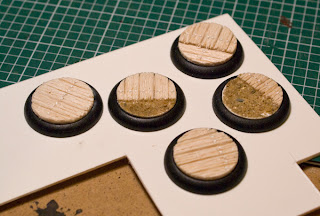 I appreciate that resin base companies are a dime a dozen, with designs and production quality to match. My intention is simply this – as I make bespoke bases for my own Malifaux exploits I'll cast up extras for the rest of the community. I don't have some extensive business plan or projections, it's just a way to contribute to the worldwide gaming community and make a little extra cash on the side to pay for the next project. The idea will hopefully expand into gaming terrain, just bits and pieces that I want to build for myself and will make available to others.

So the first project has been 30mm cowboy bases, based upon the typical boardwalk in a wild west town. The boards are heavily weathered, giving the impression of decay or just downright poor craftsmanship of the locals. I decided upon 5 different designs giving a range of options – the plain boards could even be used for pirate miniatures on a decrepit old ship. 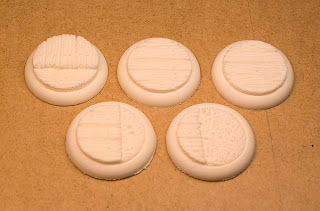 I have just completed my first set of test pieces – to see how the whole resin casting thing works. There's bubbles in them and some casts were all over the place, but it has been a fantastic learning experience. I have a meeting later in the month with the guys at Critical Mass Games who have their own resin facility, to pick their brains and get some advice, before getting quailty casts done to put up on Ebay.

I'll keep you all updated in future posts for anyone interested. 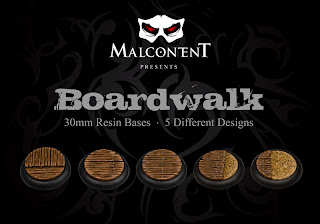 Malcontent is the name I've given to this project.

First of all the word malcontent means 'a person who is dissatisfied' and I wasn't very happy with the terrain options available out there for playing Malifaux. Nothing very interesting or exciting – I would have to make it all myself.

Secondly, it sums up the whole point of the project
– Content for Mal(ifaux) !

Want to read more about this project?
Posted by The Dark Templar