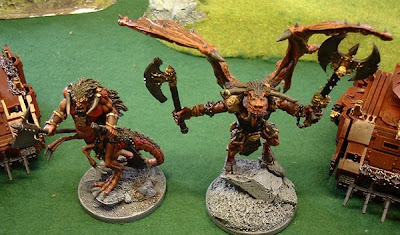 Putting the second part of the article into context this was the heyday of the Chaos codex, where you could custom build your Lord and turn him into a Daemon Prince. These were also the days before online FAQs and Errata were commonplace (or in some cases known to exist at all).

In the first game you always have a random opponent, and I had drawn Mark Coultas and his Black Templar. Great I thought, a combat army with very little shooting ability, on a table with decent terrain. And so it proved. My Bezerkers were in close combat on turn 1, and despite some heavy resistance, and the loss of my possessed Champion (sparking the premature appearance of the Bloodthirster), the result was a runaway 20 points to nil. A good start, but it gets more difficult from here on in.

In game two I had been drawn against Nick Simmerson and his Necrons (seen in White Dwarf 291), on a table with virtually no terrain. However, my initial reservations about this game were about to get a whole lot worse when Pete Haines approached me.

Whilst checking my army list he had noticed that my Daemon Prince had overspent by 25pts on Daemonic upgrades. It seems that Gifts of Khorne are classed as Daemonic upgrades not just wargear. I hasten to add that it doesn’t mention this anywhere in the codex (I’m quite the perfectionist, and check for things like this over and over). It is however mentioned in a random errata somewhere on the GW website, which I obviously hadn’t read, but the fact remained that I had an illegal Daemon Prince. The punishment was two-fold, and quite severe.

I had to remove the 25 points of Daemonic upgrades from my Lord (no big deal, and this was done with no real impact on his effectiveness – ironically the offending items had only been added to use up the points), but I also lost the 20 generalship points from my massacre in Game 1, the scores being reversed, leaving me with a score of zero. This also meant I had to fight my remaining games (ie. 5 out of 6) with a 1475 point army.

To say I was devastated is an understatement. I was absolutely distraught. I was embarrassed beyond belief, illegal armies should be unheard of at veteran level, and the effort and sacrifice ploughed into getting my army tournament-ready seemed to have been a complete waste. My head was all over the place, and the last thing I wanted to do was play 40k against a Necron army on a terrain-less table. But it’s in hopeless situations that heroes are born and little did I know how the story would conclude – silver linings seemed a million miles away.

In the past, having my back against the wall in a situation like this would have been enough to make me bail, be it literally pack up and go home, or mentally throw in the towel and gift the game to my opponent. This time things were as bad as they could be, or so it seemed. I thought about the coaching my fellow team members Sean, Lee and George had given me in the run up to this tournament and the fact it’s never over till it’s over – if the main objectives are out of reach, set yourself new goals. I decided to take out my frustration on the field of play – smack these Necrons about. However, the thing with Bezerker armies is that in Turns 1 through 3, you’re the one taking all the punishment while you try and get into combat, and so it was this time.

I had guys out on foot in no time getting shot to pieces. But when you’ve got a Bloodthirster with wings and a Daemon Prince who can charge 12 inches, things can soon change in Turns 4 to 6! Before I knew it the Necrons were running away, not enough for a big win, but a 13-7 score was a big mental victory for me.

The end of Saturday saw Game 3, and possibly the most enjoyable game of the weekend. My opponent was Tim Cerullo and his Black Templar. He just wanted a relaxed game, so we played at ease and had a great battle with many a story-worthy incident. My Predators had been exchanging fire with his hull-down Destructor, to little effect. He had two units of troops hiding behind it, but I charged a unit in, immobilising their transport on the way. The unit hit the rear of a Whirlwind, whilst the Champion attacked the side of the pesky Predator. The damage was limited on the Whirlwind, but the Destructor exploded in fine style, killing 7 out of the 10 Templar assault troops stood behind it - fantastic!

A massive fight ensued as the remnants of several units from both sides kicked-off where the tank had been. Little else was happening on the table, but the assault rumbled on, Templar power fists desperately trying to kill my Daemon Prince, and Bezerkers desperately trying to thin the Templar numbers. Eventually the Lord dropped, only to be replaced by the Bloodthirster. He dropped a couple of turns later, but by then my Bezerkers had mopped up. The last word was left for Tim however, as he managed (under Night Fighting conditions) to obliterate (penetrating 6) a Rhino full of Bezerkers with his Vindicator - ouch! It was enough to avoid a massacre, and my boys ran out 17-3 winners.

…to be continued.
Posted by The Dark Templar