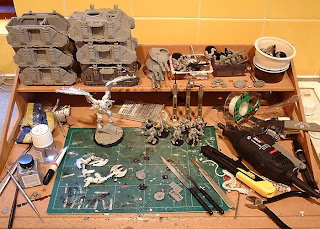 To put his into context, this diary article was written by myself a good few years ago after my experiences at the 2004 40k GT Final at Warhammer World in Nottingham. I was probably at the peak of my tournament frothing days, where every game I played had to be won and new awesome army builds had to be discovered. Aside from reasonable individual and massive team successes at the Mayhem Tournaments in London, this was about as good as it got for me – before tournament burnout, the break up of our 'Jedi Council' team and the steady decline of my interest and support of all things GW. These were great days, so I thought it worthy of posting.

So what does it feel like preparing for, and participating in the Games Workshop 40k Grand Tournament Final in Nottingham, with the prospect of competing against 149 other hardcore gamers, all of whom had to qualify at the heat stage just to be there?
No pressure then.

I do it every time! It seems no matter how many armies I have, or how little time till match day, I always feel the need to build a new army come tournament time. It doesn’t seem to matter which tournament either - local or national. This invariably results in a series of “x weeks to go” reminders in my diary, sleepless nights, and heaps of stress.

So it’s 29th September 2003, my 31st birthday and the Monday after the GT Heat 1. My Iron Warriors got me through to the final, in a respectable 33rd place. However, they just don’t seem as enjoyable in tournaments as they once were, so I decide a change is in order for the Final. Hey, I’ve got over five months till they’ll be needed, which leaves plenty of time to construct and paint a brand new army, maybe even give George (Dellapina) a run for his money in the Best Army competition.

By Christmas 2003, I have played many games with my proposed army list, but on the construction front there is nothing to be seen. However, there’s still a couple of months which should be sufficient, especially since during the holidays I build two units of Bezerkers, and the Lord model has had all of his converting done.

About a week after New Year I decide to go pure Khorne, and get my free aspiring champions. This now involves more construction as a third Bezerker unit is hastily thrown together. I still have a Bloodthirster, three Rhinos and three Predators to build.

Mid-January my freelance work has gone nuclear and I’m almost working full-time again, restricting the painting time considerably. I have undercoated all the Bezerkers and the Lord, and have begun the tedious task of painting marine armour. By the beginning of February, with a month to go, things are looking bad. Six tanks and a Bloodthirster to build and a whole lot of painting. It is about now that I take the executive decision to take time off work to complete my mammoth task - there is no way I’m bailing out on this one.

The second half of February saw a build and paint frenzy of heroic stature, but with a week and a half to go I still had six tanks to build, a Bloodthirster to paint, plus details to be painted on everything else. Not good, but I ploughed on regardless, ignoring the possibility that I wouldn’t finish in time.

We were leaving for Nottingham on the Friday morning, and I was staying at a friend's place on Thursday night, in addition to working on the Monday, so that meant I only had two and a half days during my final week. The Bezerkers were complete, and the Daemon Prince almost, things were looking up except for my six vehicles, which were built but not even undercoated. I managed to paint the Bloodthirster in a single dedicated day, which left two days for the tanks.

We arrived in Nottingham at George’s house at 3pm on Friday. He had kindly set up his painting table for me as I still had details to finish on my tanks, a minor miracle under the circumstances.

The best part of a tournament by far, in my humble opinion, is not the gaming during the day (no, that can be damned hard work sometimes, even unenjoyable on occasion). The best part of a gaming weekend is the times in between playing, when you’re chatting, joking, having a laugh with your mates, old and new. It’s the drinking beer on Saturday night and playing X-Box till 3am, knowing you’ve got a tough Day 2 ahead. Then, so long as you didn’t get slaughtered in the gaming, and you get home in one piece without crashing the car, you can look back over your weekend with a sense of satisfaction that it was worthwhile and you had a great time.

So did that happen for me this time?

Yes, but not for the reasons I expected…

Tale of a Tournament Gamer part 2