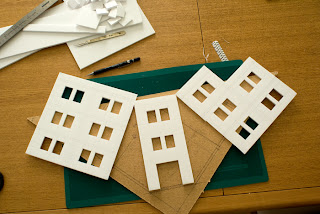 Having done lots of research and sketches it was time to get real and get building.

Of all the building images I've collected I decided to use this one as the guide for my first piece of Malifaux terrain. The photograph is of a jewelers shop in Preston and whilst I like the overall shape and design, I will not be following it exactly. 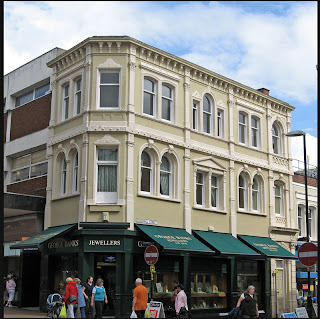 The piece I want to build is a very tall office or residential block – maybe Guild headquarters/library or at least a building of some significance. Given that it will take up a whole quarter section of the available board space it needs to be impressive. It will have three floors plus the roof, with a lower roof section, outside ladders and large internal areas. I'm also contemplating building a small tower to go on the roof to make it even taller, but that will come much later.

Later down the line I want to adopt the bridge idea from the Bridge of Sighs image seen in part 1 of this series, make it as a separate piece that can be attached to a first or second storey window section and span across the street to an adjacent building. I'm really like the idea of high walkways as a shortcut (if somewhat risky) around the gaming board. 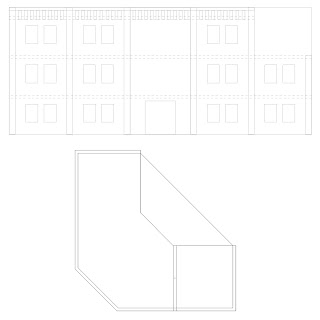 The first step was to finalise the design of my first building and get some viable measurements from which to work. The set of buildings, once complete, will have a smiliar look to them and be based upon the same grid. I jumped onto the computer and put some measurements in based upon the space available in a corner section of my Malifaux board, which roughly equated to a large triangle. 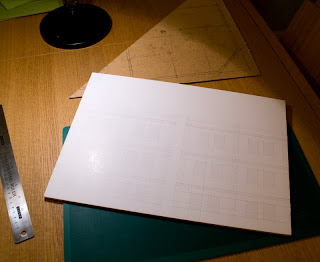 Having already cut out my triangular shaped base board I sketched out the footprint as a glue guide, and then went hunting for foamboard. I spent an evening measuring and drawing up my building design, making sure that measurements were as accurate as I could make them. Something always gives in the final build so the more accurate I could be now the easier life would be later down the line.

Once drawn up the initial pieces were cut out and stuck into position with PVA and some masking tape for stability. 24 hours later, once I could be sure the glue was dry I stuck down the two side pieces that I had drawn up and cut out in the meantime. 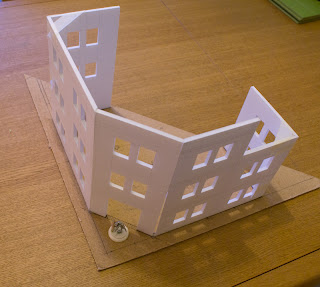 That was two days ago and as you can see we're looking in good shape. I have to choose my next step carefully as I don't want to enclose anything I will need to access later to paint, etc. I have my two models Nino and Austringer out there for scale comparisons. 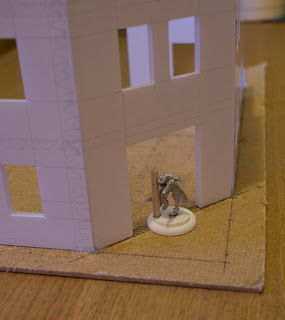 You may have noticed the gap to the right of the front door. This was due to (1) a wonky 45 degree scalpel cut where I was concentrating more on the tv than the job in hand (not clever!) and (2) some mild warping of the foamboard which had been stored badly. I'm not overly concerned as I can fill this at a later stage. 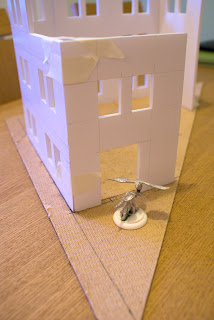 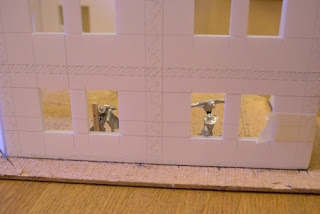