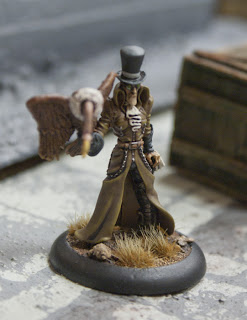 I'm finally home after 4 days away in Wigan in the North of England. The point of the trip was two-fold. First of all I was finishing up some DIY at my Mom's house that was started in April, which got done but these things are never really completed so more trips are planned.

Secondly I was going to visit Craig and Dale from Critical Mass Games to get some hands on experience planning and casting resin models. I've been friends with Craig for pretty much 10 years now and considering I grew up and lived in Wigan until my late 20's it's ironic that I should only meet him after I moved south to Kent. He was the first person I knew that played non-GW stuff (which seemed odd to me at the time) and introduced me to Warmachine and Flames of War. 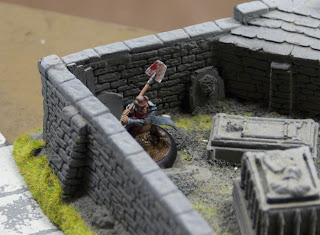 I had heard through the grapevine that despite being up against it on a daily basis running Critical Mass Games he had bought and painted a Malifaux crew – Nicodem. I had taken my mobile board and we arranged a game or two at the Wigan Wargames Club on Friday evening. Having never played against anything except the Vikkis, and having had plenty of time to read Nicodem's rules, I was very cautious about squaring up to them. In addition we'd played less than 10 games of Malifaux between us (and I haven't played in a good three weeks) so it was never gong to be a fast riveting game. 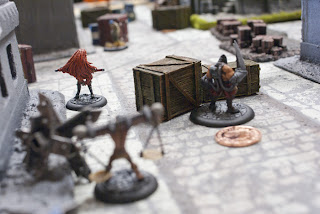 We both rolled Destroy the Evidence so dispersed 1p and 2p coins as objectives. As the turns ticked by I found myself hanging back waiting to see Nicodem's tricks but aside from raising zombies and self-mutilating punks nothing much happened. I decided I wasn't going to learn anything unless I stuck my neck out there to see what would happen so went for it in the latter half of the game. Many of the anti-undead specific tricks that Lady J's crew has (and I've never had cause to use) finally came in useful and with some coordinated attacks I managed to thin out the zombie ranks and had Nicodem on the run. One combat of note involved Sebastian charging Lady J and inflicting a hit (which I decided not to cheat as he couldn't do that much damage). Craig then proceeded to flip the Red Joker for damage inflicting severe and then moderate wounds on my Master. It wasn't quite enough to kill her but left her staggering and forced a healing flip next turn. 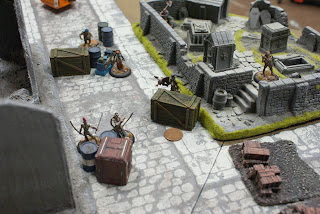 By turn 6 Nicodem had no counters left and was running whilst my crew advanced en masse and achieved both schemes. The game ended 4-1 to The Guild.

We decided to swap crews for our second game so I got to try my hand at running a Rezzer crew. Having watched a few of Craig's tricks and reading the cards I decided to go for it with raising zombies and bog the Guild crew down with bodies. I had Sebastian Exhuming like a man possessed and throwing the counters out in front then casting his (0) action to activate Nicodem who would raise them and Reanimate a punk zombie to boot. In return the Guild just shot and hacked them down which didn't actually help me given we'd both rolled Slaughter for our Strategies. 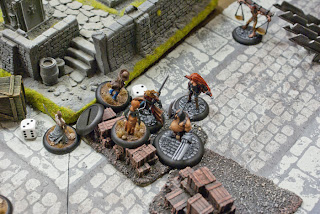 Much fun was had and despite my best efforts I couldn't achieve my Schemes either and The Guild ran out 4-0 winners. The obvious conclusions from the game were that (1) Lady J is awesome against undead and (2) Craig needs some more choice when hiring his crew, another vulture and maybe some crooked men, convict gunslinger. 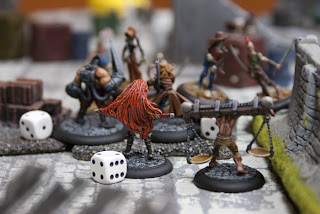 Aside from gaming I managed to get some more painting done – another Death Marshal finished and a couple of layers of paint on the last one. I also got the flesh painted on Perdita, so full steam ahead with the Ortegas.
Posted by The Dark Templar