Quick 40k/Malifaux Terrain: The Next Step 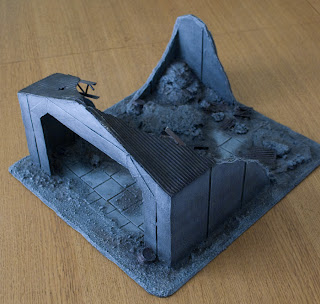 If you haven't already had a read through my previous post about Quick 40k/Malifaux Terrain I suggest you do now. If you find that having read through said post you think the end product is a little boring, a bit bland, not a lot of character then this could be the post for you.

Taking the basic ideas and premise of the last post we're taking it a step further. The piece shown here I built for 40k some time ago (almost 8 years!) and it has proven it's worth more recently for Malifaux – if a little big and rather open. 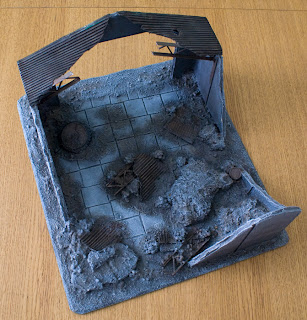 To begin with, instead of using a triagular shaped base, we use a square/rectangle of hardboard on which to build our ruined warehouse/workshop/munitions factory. Taking the basic foamboard corner built in the previous post the process was modified by joining two together to create the entrance way and adjoining walls. A regular corner piece was used to represent the back corner of the building. 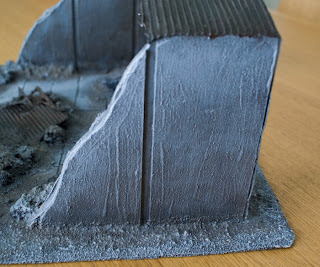 The main difference with this construction was the addition of thick card panels to the walls, inside and out, to give the building more support and more gravitas – a reinforced, armoured building of some importance. The card used was artists mounting board, again off-cuts and scrap – no need to spend money unnecessarily. A rough doorframe was constructed around the front of the building using the same material. 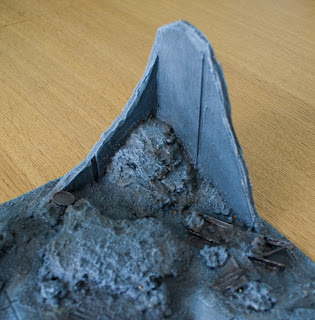 As before squares of paper or thin card were dotted around the interior to represent the workshop floor and chunks of torn polystyrene we shaped and glued to build up the volume of rubble inside. Small pieces of polystyrene, stones and then smaller grades of stones and sand were added around the entirity of the base, but not before characterful elements were added – the buried metal barrels, the vehicle wheel, scaffolding and other metallic structural elements.

As in our previous buildings, the whole thing was gien a liberal coat of masonary paint to blend all the elements together, avoiding anything not meant to be stonework or sometimes painting it anyway to add to the buried feeling. 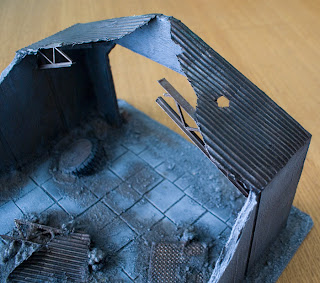 Styrene roofing structure was added, melting the end with a lighter to imply the intense heat of the building destruction. On top of this off-cuts of corrugated craft card was added showing the remnance of the roof. I poked a hole in the 'roof' with a pencil to illustrate shrapnel damage.

At this point the building was painted using the grey tones of our previous buildings, the metallic elements were painted boltgun metal (as I recall) mixed with black, drybrushed with pure boltgun metal then inked to hell with raw black and chestnut inks. 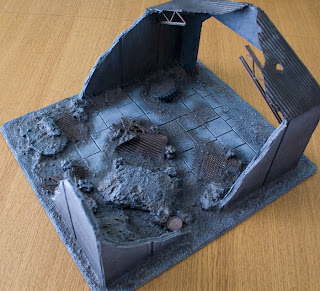 And there you have it. Taking the simple idea illustrated in the previous post and taking it a step further to create a more characterful element for your battlefield. I admit this piece could also be considered generic maybe even a little bland but it shows that building like this are achieveable simply and for not much cost.