July ended with a late flurry a gaming, which made a pleasant change from the painting and constructing.

A fortnight ago saw me play a couple of games of Malifaux against Bull's Viktoria crew. He's starting to get the hang of them and combos now infiltrate his tactics. The first game, against my Lady Justice, introduced Nino and the Austringer to the Guild ranks who both played their part if not stunningly so. Their ranged threat alone did most of the damage. The Guild moved across the board en masse in order to achieve their Stake a Claim strategy as well as sympathetic Schemes. A close call but Game 1 to The Guild. 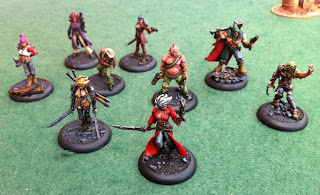 Game 2 introduced Perdita in place of Lady J and also saw The Executioner in place of a couple of Death Marshals – not the best choice given a Strategy flip of Reconnoiter but it was more about fun and trying out new models. I didn't fancy my chances to be honest so decided to protect the objectives for the Vikki's Destroy the Evidence Strategy and frustrate them rather than go out to achieve my own Strategy from the off.

The first main talking point involved the Vikkis slingshot to get Sword Vikki in melee with Nino and The Judge. The cards were cheated to get the trigger so both Guild members would die in the same activation. Alas at the crucial moment Bull flipped the Black Joker for damage and the whole move fell apart – Nino survived by the skin of his teeth, Vikki was then dispatched immediately and the game had been turned upside down. The Guild started to move around the table to complete Reconnoiter and the game was on.

Next talking point involved Taelor charging Perdita but, thanks to her (0) Action, Miss Ortega got to shoot at the incoming hammer of death! A chance flip of the Red Joker for damage saw Taelor on her knees and only alive thanks to her Hard To Kill ability. Damage was avoided and Taelor was dropped soon after. Perdita managed to survive a late exchange of intense fire with the Convict Gunslinger (and no soulstones left) before the Outcasts were wiped out to the man. Game 2 to The Guild …but only thanks to the cards!

This last weekend saw my first game of Warhammer 40k in over a year and the first game fielding Chaos in 5th edition. I was facing a newbie Necron army, my opponent only having played half a dozen games ever. I took my Bezerkers supported by a couple of tanks and some Obliterators. We rolled Capture and Control and Dawn of War. The game ebbed and flowed and I felt under little to moderate threat given my experience versus that of my opponent. I knew my Chaos Codex was broken, however, what I hadn't anticipated was the fact that 5th edition is …awful. Add to that the fact that I am a little rusty and the game devolved into a war of attrition. I had purposefully ignored the Phase Out rule to make it more of a game but was slowly starting to pay the price.

Carefully manoeuvring my Armour 13 tanks when charged in combat only for the attackers to hit the rear armour (what a stupid rule**) left me vulnerable and undermined my strategy across the board. Despite some rather naive tactical mistakes my opponent was pushing me to the limit and I was convinced come turn 4 that I could not win outright. The latter couple of turns saw us beat each other to a pulp (tomb spiders…grrr) and I eventually stole in to defend my own objective. A quick calculation saw that the Necrons did indeed Phase Out and the game was won. Having less than half a dozen models left on the board didn't feel much like a win I have to say.

Contemplation in the aftermath of the game did nothing to improve my lack of enthusiasm for GW's flagship sci-fi game and the one-dimensional aspect of play (compared to the subtleties and combos of Malifaux) made the experience seem rather flat. No doubt the Chaos codex didn't help but it's just not doing it for me.

Having said that I have committed to play again as my new local opponent dips his toe in the water and expands his Necrons. I already have an alternative Chaos lineup in mind to try and improve things – I even got briefly excited at the prospect of resurrecting my Dark Templar project, but let's not be hasty, it soon passed. In return my opponent has purchased a Malifaux crew – Rasputina – and this coming Friday will be his first foray through the breach with a handful of demo games. He's quite excited at the prospect of only having to paint 5 models!

** I have to say there were two rules that really annoyed me whilst playing. The first, as mentioned above, was the fact that all close combat against vehicles now hit rear armour values. Anything other than Land Raiders and Monoliths are so vulnerable now and can no longer be used as blocking mechanisms which, for a close combat army, is quite key. The second rule of no use to anyone is the wound allocation – what a load of rubbish! If your missile launcher or melta gun guy bought it in a firefight surely one of his comrades would pick up the special weapon and effectively take his place. Not only that but it complicates and slows the game down no end. End of rant, guess I'll have to find a workaround.