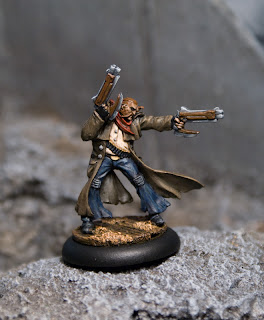 Perdita faced off against Rasputina again last night, 25ss, but neither myself nor opponent Fug could have predicted the evening's events.

It was only Fug's third or fourth proper game of Malifaux and he was still getting to grips with his crew, especially given the recent additions – Essence of Power and a Silent One. He'd done his research before the game and discovered he could have several Ice Pillars in place during the game. This became the basis for his tactics.

Rasputina had a Silent One, an Ice Golem, Essence of Power and two Ice Gamin.

Perdita took Santiago, Enslaved Nephilim and three Death Marshals. I purposefully didn't take an Austringer as I wanted to prove he wasn't essential, plus I wanted to test out Obey as much as possible.

We rolled Strategies – Rasputina got Escape and Survive, Perdita Contain Power. This set up a very characterful situation, with all the emphasis on Perdita chasing and taking down Raspy. Fug chose Assassinate and Bodyguard for his Schemes, which further added to the story – in addition he announced them, something we never normally do. I decided upon Hold Out and Grudge on the Silent One. The deployment was standard set up.

I have to admit to being very confident at this stage.

Fug set up Raspy and the crew pretty central on his side of the board. He won initiative for turn 1 and shuffled everyone forward, the Silent One entering the ruined building towards the middle of the table, giving it great line of sight for Perfect Mirror. I had two Death Marshals on the right flank, Santiago and the third Death Marshal to the left and Perdita and totem in the middle. I moved Perdita to the left flank and moved Santiago more central.

Next turn Rasputina continued to move forward, to my right, in a very bold fashion – firing December's Curse at my two Death Marshals, hitting both with the blast (newbie error of mine positioning them too close together). One overpower trigger later both were dead. Ouch!!

I had moved Perdita further out to the left earlier on in the turn and she was looking very much out of the game. Santiago moved to the middle of the board beside a couple of Ice Pillars that had appeared. He was exposed but I was hoping he'd lose a handful of wounds to trigger his extra skills. 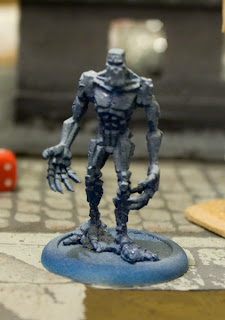 Things got nasty from here on in. The Silent One, now at the top of the ruined building, exchanged ranged shots/magic with Santiago – the Ortega getting the better of the exchanges thanks mainly to Perdita and the totem casting (or attempting to) Obey on him. She had now made it to the middle of the board to try and rescue things. A Gamin and Ice Golem had moved to the other side of the wall of Ice Pillars that now split the centre of the board in two, separating the Guild and Arcanist forces.

At the beginning of the next turn Perdita moved, shot out an Ice Pillar, then cast Obey on the Ice Golem who charged Rasputina. Unfortunately he only managed to inflict a single wound before moving back towards the centre of the board and blasting Santiago.

More Ice Pillars had filled the gap and going into turn 5 it was do or die time for Perdita. Santiago was down to three wounds so in full bonus mode. The lone Death Marshal shot out a pillar before Santiago opened up on the Golem lurking on the other side. He exploded, inflicting wounds on the Gamin stood behind him. Santiago then finished off the Gamin, leaving the door open for his younger sister. Perdita moved into the gap between the pillars and charged Rasputina, knocking 5 wounds off her – still 5 to go. Damage came back, taking Miss Ortega down to her last three wounds. The Silent One came out of the building, casting Ice Wind to heal Rasputina and take Perdita down to her last wound.

Turn 6 and everything was held by a thread. I fought tooth and nail, spending my last soulstone, to win initiative. At this point the game should have been in the bag. I activated Santiago and Perdita, then made a game losing mistake.

I moved Santiago around the corner just beyond melee range of Raspy and Perdita. He then laid into the Silent One with his paired guns taking it down and completing my Scheme. Unfortunately I had forgotten the Silent One also explodes upon death, hitting Perdita in the blast. I desperately looked for some way to avoid taking that last wound on my master but there was nothing left. Perdita died, handing Fug his Scheme. Rasputina, no longer in melee, blasted Santiago – dead – she then put up more Ice Pillars. The lone Death Marshal and Totem could do nothing but destroy a pillar on the off chance the game would continue.

When the scores were added up we had both achieved our respective Schemes and both failed our Strategies. However, because he had announced his Schemes Fug won 4-2.

So, the ice man cometh – whether it's Fug and his icy Arcanist crew or Santiago and his MVP coolness under fire.

Fug announced shortly afterwards that this game summed up why, even as a newbie gamer, he much prefers Malifaux to 40k.
I think I agree!