Let there be paint 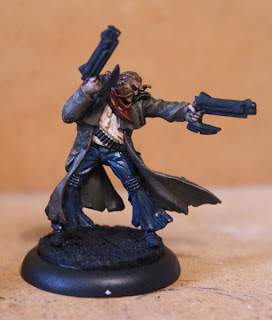 I've been very conscious of the fact that I have done absolutely no painting for over a month now. I've spent a fair amount of time with my painting tray but it's been mostly building my sewer bases for Sonnia – had a whole weekend of that. I've also spent time building some new bits of terrain for my Malifaux board. I've even had a half dozen demo games of Malifaux. However, not a drop of paint has been seen, so I took it upon myself to grab a couple of hours last night to make some progress.

The focus of the evening was Santiago Ortega, who has been a stalwart in the last few demo games. Whilst his older brother Francisco has been flapping about under pressure and not really contributing much (except as a target for the enemy), Santiago has proved his worth with his amazing shooting skills – we've not even seen his increased abilities once at half wounds. So I set to work giving him some pride and making sure he would no longer run around the board 'naked'.

Whilst this was never going to be one of my best painted models, I need to just get some models painted as I'm developing a rather long backlog and my perfectionism is causing me to have to play with more and more unpainted models. Not acceptable.

I chose a slightly different brown scheme for his coat. Regular visitors will know that I have already painted a half dozen brown overcoats, so this time I wanted a change. Still needs a final highlight but I'm pleased so far. Same goes for his trousers. Strangely, he is the first model in my Malifaux collection that has required eyes painting, however, I've just noticed the right eye has been painted too central, so this will need correcting. The skin tones are based around Vermin brown, as is the hair. 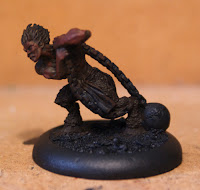 Whilst waiting for paint to dry I also applied some initial colour to Perdita's totem – Enslaved Nephilim. I decided I want any Nephilim I paint to be devilish – very much of Khorne – so I'm using my a similar scheme to my Blood Angels. Only managed to get a couple of layers on this little fella but I am already pleased will how this will look when finished.

This little stint of painting has really invigorated me. Hopefully this will mean more posts about painting and more painted models. Bull's painting speed means that he never plays with unpainted models and I refuse to be the one with the bare metal.
Posted by The Dark Templar