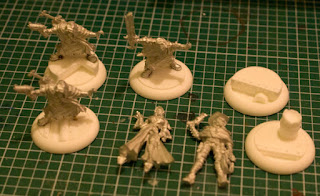 So given that it's been the best part of a week since the last post I thought I should share the progress over the last few days.

First of all last Tuesday a couple more games were logged against our new gamer, Fug. He's putting together a Rasputina crew and has the basics down. He's currently painting up the Cult of December and has new models it seems every time I speak to him. The two games we played were full rules, Strategies and Schemes which went well. He's starting to learn about the combinations and un-learning the desire to just kill stuff. Hope to have a few more games soon and maybe some photos of his crew.

Elsewhere a couple of the Ortegas were undercoated and the sewer base masters were completed and moulds made. Today I did a first round of resin casting, with mixed results. By the end of the session they were looking pretty good and this evening I started to base up my Sonia Criid crew on them (above). Unfortunately I discovered too late that Witchling legs are very fragile, so there is some greenstuff work to do to repair the damage – not least create a peg-leg for the poor chap whose entire limb snapped off!
Posted by The Dark Templar