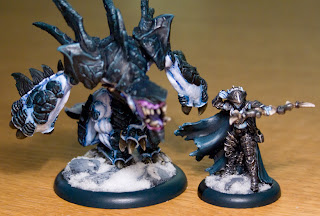 So, back to work today with a bump after eleven days off (though it doesn't feel like it). At least the blog posting schedule should be back on track now. Routine can be a wonderful thing at times.

The last couple of days I've managed to find some decent painting time so made it my mission to complete the two models that have been hanging around the painting table for too long – the Carnivean and Lylyth. Apologies for the appalling photos, they were taken in haste this morning. 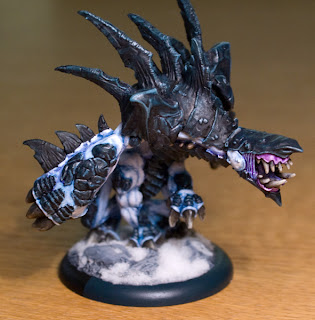 Not much to say about the Carnivean after the last few posts. I went back in with blue and purple washes (though they look really harsh up close in the photos, they came out well) to the point the skin was quite dark again. I then highlighted with thinned white to the point it looked balanced again. Claws were done in my usual mix and the base was painted and covered in snow to match the other Legion minis. I have picked up Woodland Scenics snow flock which, unlike the GW one, actually looks like snow not white strands of hair. I mixed into my PVA and water mix and applied to the base – whilst still wet I scattered addition snow flock on top. It covers a multitude of sins on the Carnivean base. 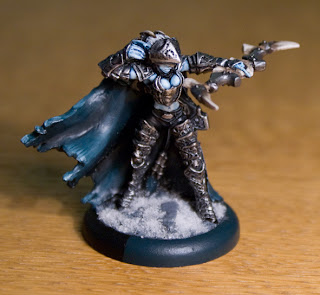 Lylyth didn't need much doing, just a few details finishing and a repaint of her skin to be more in line with the beasts. It was surprising how time consuming this turned out to be.

You may also notice that the bases are two-tone. Unlike every other game I've played, models in Warmachine/Hordes don't have 360 degree vision (except for a select few) so, to avoid any arguments, it is generally accepted that you paint the base edge in quadrants, either 180 or 90 degree sections. I've seen beautifully elaborate base edges full of colour and runes, but I wanted it to be more subtle so went with the Black/Coal Black option… for now.

Currently left on the painting table are the two remaining Shredders and the Raek, all of which should be relatively straightforward to complete. After that I am spoiled for choice. I have a Shepherd and a Nephilim Bolt Thrower built, however, I am due a package any day now with even more goodies!!
Posted by The Dark Templar