As part of the preamble to the 6th Edition release, I have decided to go through the models I have in my various 40k armies and assess how things stand. Today it is the turn of the Dark Templar marines. 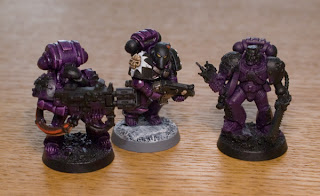 First of all we have the three benchmark marines of the latest DT incarnation. They were the test to prove the theory – that I could have a unique army of Mk 6 marines with each one having their own personality. They were also a test for the new purple and black colour scheme. However, individually sculpted shoulder pads made the process slow and laborious so the project stalled very quickly. Now I have the ability to cast resin at home things should become a lot easier, once a set of master sculpts have been done. 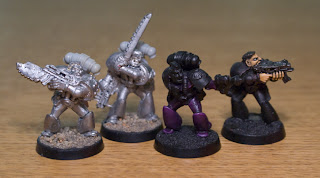 One of the other goals of the project was to find a way to include some of favourite classic Rogue Trader marines that represented my first step into the world of wargaming. Many of them sported Mk 6 armour anyway so it would be an ideal opportunity to give them a permanent home, rather than repaint them every 10 years or have them in a permanent state of bare metal. 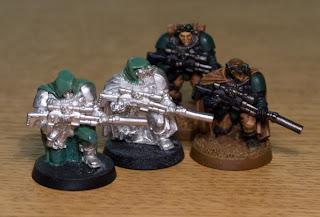 Some of you may remember my Scout snipers as they were the subject of a greenstuff post in the early days of the blog. Like the veteran marines above, it would be nice to give them a permanent home. 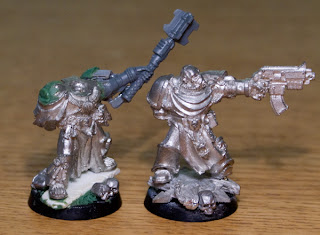 These are two of the characters that were started alongside the benchmark marines at the top, who were going to lead the troops. The limited edition Black Templar model needed some amending to become a Dark Templar; the soon-to-be Chaplain is based upon a veteran marine with his head and arms cut off. These have the potential to be really unique models in the army – very exciting. 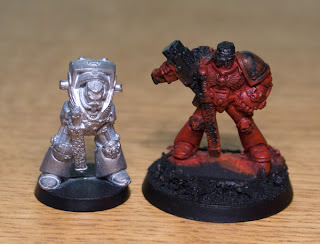 When I started the Blood Angels project back in 2010 I went nuts on Ebay and gathered together a collection of iconic models to have as part of the army. Now that project is being sold off I had the opportunity to offload these back on Ebay, but I think I will translate them into the new army – they're just too cool to let go! The Terminator Captain was my favourite model for many years and one of the first I ever painted. The limited edition Captain was one of those figures I always wanted to own back in the early nineties after seeing it in the pages of White Dwarf. It feels only right that these models become Dark Templar. 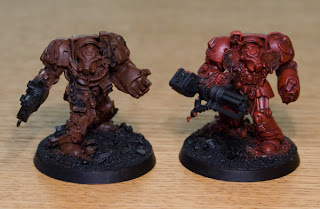 Two other, more recent, iconic model acquisitions are these Blood Angel Terminators from the Space Hulk box set. Similarly they were going to be a part of the Blood Angel project but (after some cutting and sawing) will make a fantastic addition to the Dark Templar ranks.

There's no doubt that I have manged to collect a group of fantastic models, and the prospect of having them all in my Dark Templar army is very exciting. However, the bottom line is that I don't even have a valid 5-man squad so I would be starting the army virtually from scratch. As much as I love the characters and Terminators that have been collected, when putting together a marine army it is the Troops that need to come first and in volume.

The path ahead is clear. Once I do get around to revisiting the Dark Templar I will need to dig out my collection of Mk6 bodies and heads that I have stashed in the attic (10 years' worth) and sculpt a set of shoulder pads and several sets of legs that can be used to quickly build my footsloggers.

Next time I shall be looking at my Dark Templar vehicles…


Don't forget the ongoing unwanted model giveaway!
You now have just three days to get your entry in…
Win Blood Angels!