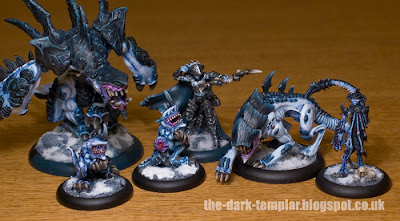 It's been a while since we saw any of my newbie Legion army on the blog, but things have been progressing.

The Raek is finally complete, adding a new dimension to the original starter set models. The Blue/White skin continues to be problematic on the larger beasts, mainly due to me not having pinned down a painting procedure – my normal technique that I illustrated earlier in the year doesn't work here with the skin so I'm still winging it a bit. With more mid-sized and larger beasts on the horizon, this issue will no doubt sort itself over time, or I'll take an age finishing anything.

I'm also starting to get the snow technique to a point where I really like the results (binned the Games Workshop snow). Adding white paint to the process was a disaster – as you can see on the base on the amputated Shredder – and excessive coverage isn't great either (Carnivean base, although this was used to cover a multitude of sins). The best results so far can be seen on the Forsaken's base (to the far right). 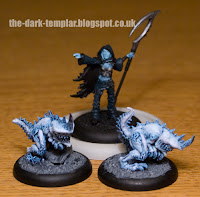 The painting process continues, and I have three potential 'easy wins' on the table at the moment. The last two Shredders should have been done by now if I'm honest – the bright lights of shiner models distracted me after the first two were finished. I also have my Shepherd, who should be quite quick to finish, following a similar scheme to Lylyth. 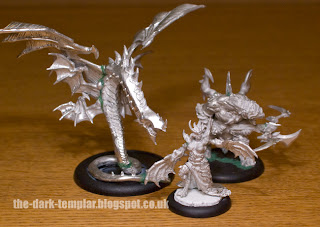 Then, waiting in the wings if you'll excuse the pun, is my next Heavy Warbeast – Angelius!

This model has been problematic to build due to some miscast pieces, most notably the lower body/tail section. The weight distribution has also been a challenge and, in order to remain stable, the model is almost off the front of the base – second attempt as the first wouldn't stay upright for long.

We also have the very patient Nephilim Bolt Thrower. He will be a great addition to the team but probably more appropriate further down the line – he's just too expensive points-wise in smaller games. A lovely model though, looking forward to paint him so he'll probably end up a slow burn.

The other addition is a new Warlock. As much as I love Lylyth and her abilities/spells, she loses a lot of her effectiveness against non-beasts – i.e. Warmachines – due to them using Focus instead of generating Fury. To rectify this I bought not one, but three new Warlocks, the first of which is Absylonia. She looks not disimilar to the Forsaken, but even more mutated, and she has some fantastic abilites which should prove a lot of fun against Bull's Menoth army. She should also be relatively quick to paint, which always helps motivation.