New Malifaux Faction On The Cards I've just heard the news whilst listening to the latest episode of Gamers Lounge.

Wyrd will be at Gen Con in August and this usually means new stuff. It has been confirmed that there will be a book 4 for Malifaux and it will introduce a new faction into the game – Ten Thunders. 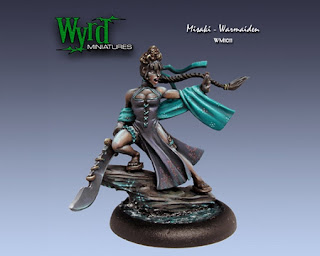 Misaki has been a part of the game from the early days, as part of the Outcast faction, and the Ten Thunders Brothers were introduced last year to support her. Whether they will remain Outcasts, be moved to the new faction, or be available as both is unconfirmed at the moment.

Eric J confirmed that Misaki will not be upgraded to a Henchman, but I just wonder if she will actually become a master in the new faction – Eric's tone of voice just made me think there is something he's not telling us!

My first thoughts about the faction were – great, a new faction, very exciting and something that expands the game. My second thoughts were that this could be treading very heavily on the toes of GCT Studios and their Bushido game, which has been a rising star these last 12 months. My third thought was, damn, I need to get my Bamboo bases back on the go…

Any other thoughts out there?

Other things to note, for those who don't want to listen to the podcast, is a new Guild-orientated Miss model – Miss Sterious – which is intriguing. My guess is a female Death Marshall/Exorcist or maybe Witchling.

The other significant announcement was the expected release of Story packs. From what I can gather they will include new campaign-orientated strategies and will also include new models. After my post about Malifaux campaign thoughts I'm looking forward to seeing these.
Posted by The Dark Templar