Why WMH over WH40k - Revisited 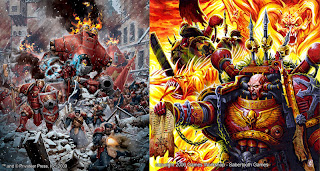 I posted last week about the merits of both Warmachines and Hordes, comparing them to 40k and explaining how I couldn't see how 40k would win be back with 6th Edition.

I received a comment from Mik who said he has a "why can't we all just get along" attitude towards it all, and it has stuck with me.

As I type this I am on holiday in Cornwall, Newquay to be exact, and I have a stinking cold - no lounging on the beach today and plenty of time to think and type.

I've had the idea of playing 40k again bobbing around my head all this time, partly due to the rumours of the new rulebook release as well as the new flyers, but also due to the fact that I know my gaming buddy Bull loves his Orks and it is inevitable (as well as a lot of fun) that a game is on the cards once the new rules hit. He will be buying the new Orky flyer and want to give it a test run or two at least.

Having just invested money in WMH I'm not looking to put that down for a while but, as Mik says, why should playing one game exclude the possibility of playing the other? Aside from the cost implications or running two of the more expensive game systems available, my wife going nuts at the prospect of twice as many miniatures co-inhabiting the living space of our home and the division of hobby time between the two, are there any real obstacles?

I have been playing 40k for many years and have a significant Chaos force and a ragtag collection of Imperial marines. I've decided that I will collect two 40k armies to sit alongside my Malifaux crews and my two WMH armies. I shall maintain my Iron Warriors, inducting a group of my beastmen bezerkers, forgeworld plaguemarines and thousand sons into their ranks, selling off everything else chaos-related. In tandem with this, I will pick up my Dark Templar project as and when time allows. They will be my only Imperial marines from now on. I have thoroughly tested the resin casting options thanks to my Malcontent bases so what was initially just an idea can be made reality. I have already worked through how several elements will work and it will keep my greenstuff sculpting skills up to scratch. However, if rumours are true, the Chaos codex is imminent and as they require the least amount of time it makes sense to start there.


Whether or not the 6th Edition rules are any good is a moot point really. The rulebook will be bought and games will be played, I will just try to limit any spending on GW models - they've had enough of my money already.

On the Warmachine front, I have my fledgling Legion of Everblight force, with another order just gone in to make it even bigger. This will be my main focus here for a while, to get things into shape and have options to game with. I will expand my collection of Cryx models because, well they look fantastic.
Posted by The Dark Templar