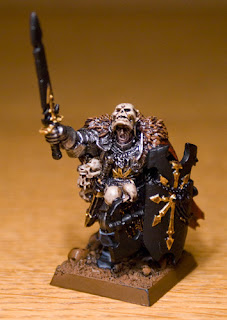 Just a handful of things this week, starting with the fella above. He's the OOP Limited Edition Chaos Standard Bearer who has been converted into a Hero (simple weapon swap). I saw one of these guys (with Standard) go for £100 but I'm not asking anything like that for this version. He's had some metal skulls added to his base and been given a simple basecoat and ink paint job. 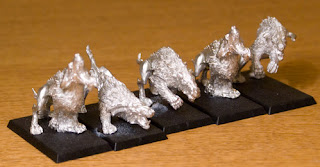 Next we have not one, but two sets of Chaos Warhounds. Not the new plastics mind you, these are the OOP metal versions. This first group (above) are pretty much as they came, bare metal superglued together and onto bases.

The second set have had a similar basecoat and ink paint job that the Hero has, plus the bases have been textured. 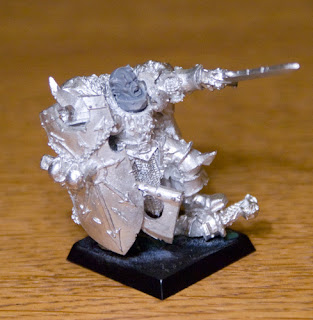 Finally this week there is a Crom the Conqueror conversion – a simple head swap. I believe this figure is now OOP, which I didn't realise. Again he is bare metal, just stuck together and onto his base.

If you like the look of any of these they are online now
– have a look at my Ebay page.

Next week on Ebay it's all about Blood Angels as I have a massive clear out, as well as more Fantasy Chaos.

The draw took place this morning for the current giveaway and I am in the process of contacting the winner.