I'm assuming you all saw the teaser trailer released by GW relating to the launch of 6th Edition 40k on 23rd June. I also assume the regular visitors among you read my recent thoughts about WMH vs WH40k.

With all this in mind, I've been going through my 40k miniatures and assessing their future and have a plan. As mentioned in the earlier post I will be keeping some stuff – I will also be selling some bits and pieces so keep a look out for announcements about that in the next few weeks.

The rest I'm going to give away free on this blog over the next month and a half – it may not be exactly 40 days of 40k but it sounded good. So if you want to own something you've read about on this blog, stay tuned!

But, what exactly am I giving away?

First to be going will be the remnants of my Blood Angels, including plastic Tycho, Sanguinary High Priest conversion and the Melta guy. They won't be finished and painted, they'll be in whatever state they're in, that's the deal. You can pick things up from there and bring them in line with your own army (or just paint them up and put them on the mantlepiece). 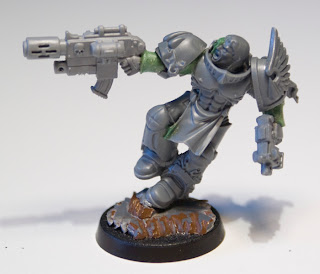 In addition to that there will be some Black Templars, Iron Warriors and Eldar, plus anything else 40k that I can find in the attic and don't want to keep.

These giveaways will kick off later this week. Everything will be announced on Twitter also, so if you've got an account follow me to stay up to date.

I will also be posting about my Chaos and Dark Templar armies – the ones that I will be keeping for 6th Edition – and evaluate how things stand. Then, once the new rules are released, I will look at what needs adding or changing and the plan of attack.

It won't be all 40k for the next few weeks though. As my Legion of Everblight army grows there will be updates and photos tracking all the progress and LOTS of new models. With a bit of luck I will have a battle report thrown in there too.

It's going to be a busy summer!
Posted by The Dark Templar