So Bull leaked the news this morning that his next team for our Blood Bowl league will be Pro Elves. This was off the back of my announcement yesterday that I will be adding Nurgle to my BB portfolio.

I've been thinking about this team for quite some time, after seeing them in the computer version of the game on YouTube. Regular followers of the blog will know that my 40k army of the moment – the moment being about a year ago – is Nurgle, so it was a natural progression to have a team boasting the same allegiances.

I thought long and hard about a name for my team, deciding in the end to go with a Star Wars theme – see how many of the player names you know!

My starting lineup will be a somewhat standard affair, ensuring that I have the more expensive players purchased. I also wanted to make sure I had the maximum amount of Disturbing Presence and Foul Appearance available to me from the beginning.

Naturally, being something of a comedy team for me, I just had to take a Beast of Nurgle. Having learned the problems of models with large bases when playing, I decided the model I chose had to fit on the same sized base as the rest of the team. 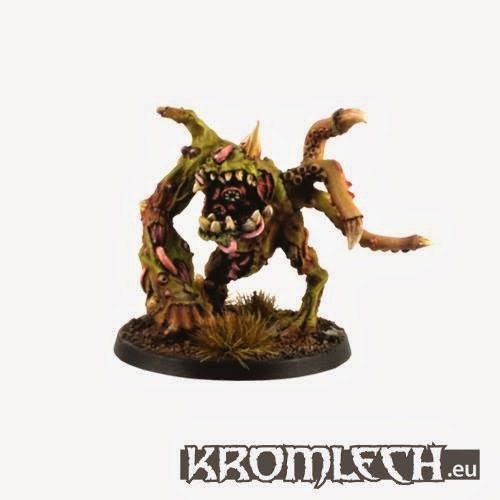 After trawling the internet for a suitable model I ended up going for a Morbid Spawn by Kromlech. He was readily available, reasonably priced and probably the smallest of the contenders. I got him to fit on a Malifaux-style 30mm base which still fits nicely within a square on a Blood Bowl pitch.

The rest of the models I had, either waiting on sprues or ready to be recycled from a previous army.

Looking forward to playing these guys, so roll on April!