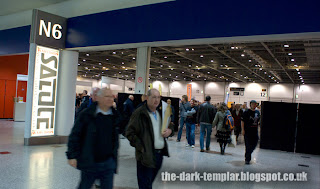 So after all the excitement, the day of Salute 2012 finally arrived. As planned I met up with Bull at Bluewater and we had a catch up over breakfast before heading out to Excel. For the first time ever we had to queue to get in, which I'm putting down to us arriving earlier than previous years – won't be doing that again!

Once inside we set off on a scout around before a coffee break, then back in for the serious business of purchases. Unfortunately I was so distracted by the bright lights and shiny things around me that I completely lost track of time and missed the arranged meeting of the bloggers in the seating area. By the time I realised and made my way there everyone had dispersed – at that point it was a needle and haystack scenario to find any individuals. Bit gutted about that, although I did spot 'Postie' later on whilst I was chatting at the Critical Mass stand.

For a more comprehensive set of photos, have a look at Tomsche's blog.

As for my own haul, I managed to do ok. Quite a few items I was after were out of stock, which is a pain. However I managed to pick up most of my "Must buys" apart from the items I had a change of heart about. I managed to come home with £100 so the wife was happy too! 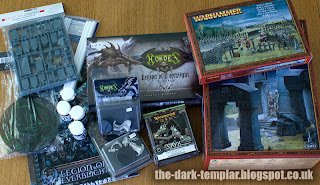 The main thing was Bull and I picking up starter boxes for Hordes. I have a game day book in with him next weekend, so it's a race to build things ready in time for an intro game. Two things I can almost guarantee: firstly my models will be build (solidly) but not painted; secondly Bull's box set will be built and painted by about Wednesday, but none of it pinned and there will be emergency glueing to come. I'll post more about this later in the week.
Posted by The Dark Templar