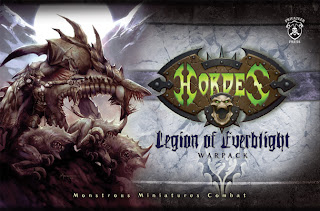 After the fun and games last week putting together the Plastic Cryx starter set, I bottled it and decided not to wait (7 days) for the release of the plastic Legion starter box – the metal version made it into my Salute haul.

This was like going back to building 40k and Fantasy models in the past – lots of metal, lots of pinning and lots of greenstuff. There was a certain familiarity and comfort in that… for 10 minutes at least.


The warlock Lylyth is a lovely model, despite being my least favourite sculpt for this character. It came in 3 pieces and one of them (a rather bulky arrow) I decided not to add. I quickly pinned her bow to her arm – first model built already, a flying start.


Next I looked at the Shredders, 4 of them, who were smaller than I imagined for some reason. It was then I discovered that I was missing a single leg – what a pain in the backside! I decided to put them to one side, as there was a pile of metal staring at me from the box that would eventually become the monstrous Carnivean.


This model is a beast and I'm not talking about his role in the animal kingdom. 15 pieces of metal, nearly all of which would need pinning and no doubt filling. I had a serious concern about him being very top heavy, especially as his stance had him leaning forward. I looked at the resin base options I had but went with the basic plastic one provided in the end, sticking a penny piece underneath for what use it would be.


Several hours later I had a Heavy Beast staring at me. The only drama was having my drill bit snap as I was drilling the hole to pin his head in place – the very last piece to be added, typical. I spent the next hour filling gaps and filing. He was looking great and remarkably well-balanced. Now it was time to go back to the Shredders (referred to on some sites as "Littlenoms" – genius). 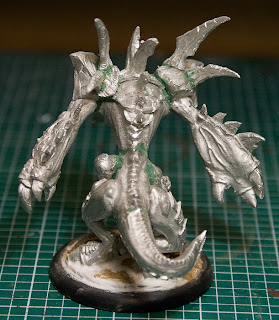 Consisting of only a body and two legs, these models should have been a doddle to build. I couldn't face pinning these so went for it. Eventually, having stuck every piece to my fingers at some point, I had 3 completed Shredders. In order to aid security and longevity I tried to ensure that every model had three points of contact with the base.


With the fourth, one-legged Shredder I wasn't going to be able to do this. I twisted the one leg he did have so that it looked like he was reeling in pain. Once glued in place I set to with the greenstuff, spending as little time as I could get away with to create an amputated limb for the poor unfortunate soul.

I have since found an awesome blog entry showing how to construct and paint the box set in 10 days – go have a look at Brushthralls.


At this point everything was based and left to dry. By the end of the weekend I had even managed to undercoat Lylyth and the 3 fully functioning Shredders.


Monday evening I sat down with the paints. I was keen to get Lylyth painted up and splash a little colour on the Shredders. Things didn't go quite to plan, but that's for another time.

I have four days to go till my first Hordes game, and with Wednesday and Thursday evenings out, will the Warpack be painted in time?
Posted by The Dark Templar