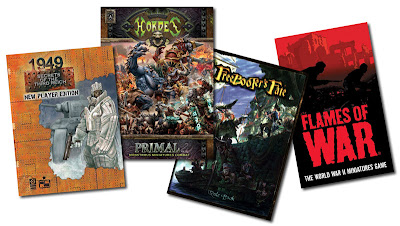 The last seven days have seen a flurry of deliveries as my pre-Salute prep hit full swing. I've always been a fan of rulebooks, even if I don't ever play the games – part of being a graphic designer I guess, plus partly due to being constantly on the look out for the next big addiction.

Last week saw the arrival of not one but four rulebooks – Hordes, Flames of War (3rd Ed.), Freebooter's Fate and Secrets of the Third Reich. All of these games have interested me at one time or another so I thought I would invest enough to take a closer look at each.

With my revived interest in Warmachine I was straight into the Hordes book, which is almost identical to the WM rulebook in layout and content. In particular, the rules regarding Fury distribution and leaching have involved lots of reading. 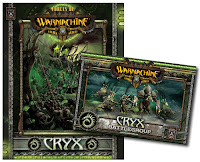 Today I went to the post office to collect the next parcel – the Cryx rulebook and starter set for Warmachine. This was simply a case of me not being able to wait until the weekend to get these bits, even risking them not arriving until after the show. But the Firestorm boys came through and the order has arrived in plenty of time to read and stick before going up to Salute at the weekend.

I used to own the metal version of this starter set, which kills me, but I'm looking forward to building this new plastic kit and giving it some paint. I will also have put together a list of initial support purchases (which I'm keeping to a minimum for now).

As for other Salute acquisitions, I'd like to pick up the Everblight faction rulebook for Hordes (don't think their plastic kit is available yet), some templates and bits for my Mercenary crew. I also want to have a couple of demo games at the Privateer Press stand to get the rules clear in my head.

Only three more sleeps until Saturday!
Posted by The Dark Templar